As noted by SetteB.IT, Apple has notified its European publishing partners for the iBookstore that it has suspended the "most favored nation" clause of its book-selling contract for a period of five years. The clause had prevented publishers from selling their books to other distributors at prices lower than those offered to Apple.

The arrangement had been the subject of an antitrust investigation by the European Commission and a settlement in that case was officially approved last week. 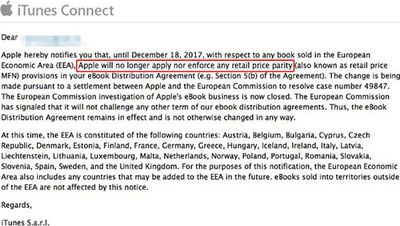 Apple worked with publishers to facilitate a landmark shift in the business model for selling books, shifting to an "agency model" in which publishers set retail prices and distributors such as Apple receive a negotiated share of that retail price, similar to how the App Store operates. Under the previous wholesale model in which distributors were allowed to set their own retail prices, Amazon was able to hold a dominant share of the market as it sold books at or below cost in order to entice customers into visiting the site to purchase other products and services.

A key part of the agency model was Apple's "most favored nation" clause guaranteeing that Apple received the best possible pricing from publishers. The move effectively meant that all major distributors offered very similar pricing on books, but with the elimination of that clause publishers are now free to negotiate with distributors, a move that will likely to allow market leaders like Amazon to gain better pricing than smaller rivals.

And usually these forums are so full of "competition is the only way to do things, anything else is amoral"..
Score: 10 Votes (Like | Disagree)

What I find amusing is there is nothing stopping people from finding PDFs of books in Google by doing a search for a book and choosing advanced search File:PDF and then converting the PDF using Calibre to ePub. True, you might not be able to find all your books, but I bet a lot will be available in PDF somewhere.

Then your issue of it working on any device is solved.

Thanks for detailing how to steal eBooks.
Score: 6 Votes (Like | Disagree)

Now, I have to pay more to buy an eBook on Amazon? That's too sad. :o


No, it means that you may buy it at the same price that you will find it on iBook store or maybe lower if amazon or others can get it at a lower cost to them or decide to sell it to a loss to get you to buy from them. It's a consumer win IMO
Score: 6 Votes (Like | Disagree)

Morod
Hooray! This should result in less expensive ebooks. That "agency model" is what kept the price of so many ebooks so high.
Score: 6 Votes (Like | Disagree)

So you are saying price match is a dumb idea; because it is better to pay more if BestBuy cannot get the product at the same low price as WallMart ?
http://www.bestbuy.com/site/Payment-Pricing/Best-Buy-Price-Match-Guarantee/pcmcat204400050011.c?id=pcmcat204400050011

To give you an example:
I bought the BluRay Movie "Leap Year" from ColumbiaHouse.com for $8.89, and on iTunes it costs $14.99 (both are 1080p). Because publishers can charge Apple more than what they charge the company which nowadays runs the ColumbiaHouse web-site. BUT THIS GOOD ?
And don't tell me the 30% which Apple is charging is causing the difference, because as you may know brick-and-mortar stores typically operate with overhead of about 50% - and not to rip you off; but just to make a profit to stay in business (Borders comes to mind).


Is it fair that apple gets to set terms of pricing for every company, removing a companies ability to loss lead, while ultimately leading to increased consumer pricing across the board.

EU and USA don't seem to think so.
Score: 5 Votes (Like | Disagree)

iphone495
Good! This shouldn't be there in the first place.
Score: 3 Votes (Like | Disagree)
Read All Comments

Thursday January 26, 2023 6:30 am PST by Tim Hardwick
The new Mac Pro coming later this year is expected to feature the same spacious modular design as the 2019 model, but with fresh concerns over its lack of upgradeability surfacing, some users are beginning to wonder what the transition away from Intel architecture actually means for Apple's most powerful Mac. The current Intel Mac Pro that Apple sells is popular with creative professionals...
Read Full Article • 496 comments