With the holiday shopping season in full swing, we've been highlighting several increasingly good deals on the iPhone 5, and Walmart is now launching new discounts on both the iPhone and iPad that may be of interest to some readers.

Starting today, Walmart has dropped prices on both the iPhone 5 and iPhone 4S, with the 16 GB iPhone 5 now on sale for just $127 and the iPhone 4S coming in at $47. 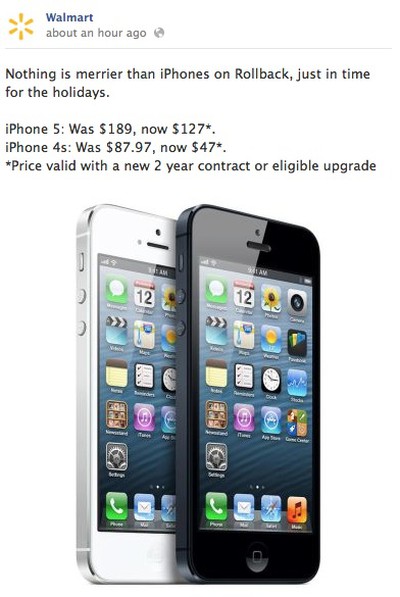 In addition, Walmart is now selling the latest fourth-generation 16 GB Wi-Fi iPad for just $399, a $100 discount from standard pricing. And beginning on Monday, Walmart will also include a $30 iTunes gift card bonus with iPad purchases.

Despite the iPhone 5 having launched in the United States less than three months ago, retailers are offering aggressive discounts on the devices to attract holiday shoppers. RadioShack is currently offering all iPhone 5 and iPhone 4S models at $50 discounts from their regular prices, and also offering email coupons for $10 credit on future purchases for every $50 spent during the holiday shopping season. RadioShack also offers price matching through its Mobile Low Price Guarantee, suggesting that it is likely to match Walmart's discounted pricing upon request.

Update: Wal-Mart spokesperson Sarah Spencer gave MacRumors this statement regarding inventory of the products on sale. Something to keep in mind for people thinking of taking advantage of the promotions:

Walmart works closely with Apple to secure some of the strongest allocations of their products. That being said, inventory is a first come first serve basis so we recommend customers come early to secure their Apple product. We will not offer rain checks but customers should know we will be refreshing our inventory on an ongoing basis.

Update 2: Walmart has contacted MacRumors to note that it erred in stating that the iPad promotion was for the current generation. It is in fact the third-generation iPad that is on closeout sale for $399.


You certainly wouldn't want to associate with THOSE kind of people.

People of quality, such as yourself, must not allow themselves to be seen with THOSE people.

I mean, really, you must maintain some standards or the peasants will start to think they are as good as you.

Don't give in...maintain your standards...the hell with the money...there are more important things at stake here!

If you can't be bothered to spend 20 minutes in the store to save over 20% on a mainly priced-locked iDevice, then just don't and spare us the holier-than-thou melodrama.

Can you double-check on this? I looked online and walmart.com shows $399 for the iPad 2, $499 for the Retina iPad (which is what I think the article refers to).

You would make a 2 hour round drive to save $90? Fuel and would almost cost you that!

Jalopybox
Must be bought in store. Ug, hate the clientele in the area near me.
Score: 13 Votes (Like | Disagree)

The discount offered is nothing when you take into account the total that will need to be paid over the two-years contract.
Score: 12 Votes (Like | Disagree)
Read All Comments

Saturday May 15, 2021 11:08 am PDT by Juli Clover
Twitter has been working on some kind of subscription service since last summer, and Jane Manchun Wong, who often digs into new features coming in apps, has shared details on just what Twitter is exploring. Twitter's subscription service could be called Twitter Blue, and at the current time, it's priced at $2.99 per month. There will be a "Collections" section that allows users to save and...
Read Full Article • 115 comments

Friday May 14, 2021 11:52 am PDT by Juli Clover
Following the discontinuation of the iMac Pro, Apple also appears to be discontinuing Space Gray "Magic" accessories that it sold separately alongside the iMac Pro. The iMac Pro was the only Space Gray Mac, and Apple designed special matching accessories for it. The Space Gray Magic Mouse 2, Magic Keyboard, and Magic Trackpad all now say "While supplies last" in small wording at the bottom...
Read Full Article • 357 comments