Steve Jobs on Computer Animation as a Milestone for Film History, Before the Release of 'Toy Story' 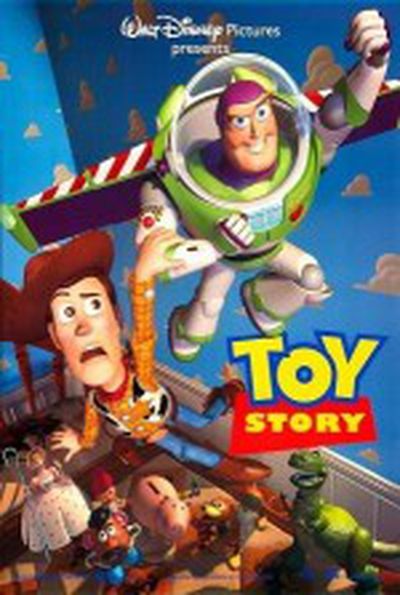 Steve Jobs famously purchased Pixar from Lucasfilm for $10 million in 1986, selling the company to Disney 20 years later for $7.4 billion. In 1995, Pixar was ready to unveil its first feature film, Toy Story, which was also the first feature film composed entirely of computer-animated graphics. Before the film was released, Steve Jobs spoke at SIGGRAPH 95, a conference for those in the computer graphics industry.

In his speech, the full video of which was discovered by Mashable, Jobs presciently compared computer-animated films to such game-changing breakthroughs as sound and Technicolor, even as Toy Story had yet to be released in theaters.

I want to talk for a minute about a place in history. The computer graphics community has been climbing the wall of the castle for 20 years, standing on each others shoulders and made immense progress as we've seen today. And finally we have now scaled the castle wall and we're in the castle now with Toy Story and I think that's an achievement that many in this room should take proud ownership in.

And we should take a few minutes today, on the hundredth anniversary of the invention of the motion picture, to contemplate the contributions that we're making. We have now pioneered, I think really, the next major offshoot of the motion picture. It's going to be a medium in its own right, it's going to have unique talents in itself that we will find boundaries for as we explore it over the next many years.


Toy Story went on to become a blockbuster, taking in over $360 million at the box office and spawning sequels, spinoffs, and extensive merchandising as it garnered a prominent place in entertainment history.

Before Toy Story, computer graphics were used for either short films or to augment live action movies with special effects. Since Toy Story, there has been a boom in the production of computer-animated films and less of the traditional hand-drawn animated films. In early November, Pixar Animation Studios named its main building in honor of Steve Jobs.

Not to discredit Pixar's accomplishments (quite the opposite, I think they're the best filmmakers on the planet), but the Canadian TV series ReBoot, the first fully CGI television program, started airing a year before Toy Story premiered.


As it says in the story it was the first fully computer generated feature film. There had been many short films as well as the TV show you mention before it but Toy Story took all this to a new level. Steve Jobs bank rolled Pixar for many years spending a vast amount of money on developing the company to the point where it could produce something like Toy Story, in computer animation he saw a future in something that many of the big players thought was a complete wast of time.
Score: 7 Votes (Like | Disagree)

mbarriault
Not to discredit Pixar's accomplishments (quite the opposite, I think they're the best filmmakers on the planet), but the Canadian TV series ReBoot, the first fully CGI television program, started airing a year before Toy Story premiered.
Score: 7 Votes (Like | Disagree)

Joe-Diver
One of history's great acquisitions.
Score: 6 Votes (Like | Disagree)

SnowLeopard OSX
I'm an avid Pixar fan -- this is brilliant.

urbanslaughter1997
This is a perfect example of what made Steve Jobs a genius. He understood the implications of every step taken. He saw the future before the rest of us imagined it.
Score: 4 Votes (Like | Disagree)

Friday August 12, 2022 12:46 pm PDT by Juli Clover
Samsung this week launched its fourth-generation foldable devices, the $1,000 Galaxy Z Flip and the $1,800 Galaxy Z Fold. Though there's no sign of a comparable Apple foldable device on the horizon, rumors suggest prototypes are in the works, so we thought we'd take a look at Samsung's newest smartphones to see what Apple needs to measure up to when a foldable iPhone does come out. Subscribe ...
Read Full Article • 328 comments