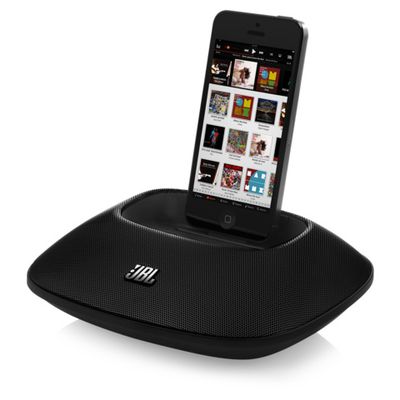 JBL OnBeat Micro
The two speaker docks include the OnBeat Micro ($99.95) for the iPhone 5 and other small devices, and the larger OnBeat Venue Lightning ($199.95) supporting the full line of Lightning devices including iPad, iPad mini, iPhone 5, iPod touch, and iPod nano.

Based on a quick listening session, we can report that the Venue LT sounded very full and clear. Even with the optional bass- or vocal-boosts enabled, it didn't seem like the speakers were having trouble pushing out a high level of volume. The Micro on the other hand sounded decidedly tinny, which we're frankly not surprised about given the size. Both systems are compatible with JBL's MusicFlow app as well, giving you some extended options for tweaking the EQ.

Engadget also noted a couple of issues with the Lightning connector itself on the docks, including the observation that the docks will not work with many common iPhone cases and that flexibility in the connector on the docks feels somewhat wobbly, allowing flexibility while docking to lessen the risk of breakage but leading to concerns about stability.

JBL was one of the vendors highlighted by Apple during the Lightning connector's introduction in mid-September as having received advance access to the standard. Other vendors included Bose, B&W, and B&O, which should all be announcing their own speaker products shortly.

Leonard1818
why is everyone so hung up on "Docks" when we have much simpler/better solutions available. I've never really seen the appeal of a "dock".
Score: 9 Votes (Like | Disagree)

I prefer speaker systems with airplay.


While Airplay makes a lot of sense, it's also nice to be able to charge the phone at the same time
Score: 7 Votes (Like | Disagree)

Mr. Gates
That tiny connector seems a bit flimsy to support the weight of the phone.

This just doesn't make any sense to make... why not just have a wireless connection where you don't have to worry about the connection fitting or not.

but your point is mute. plug it in and stream. Now its charging and playing AT THE SAME TIME. woa.

The expression is "your point is MOOT." Not MUTE. I'm sorry, that was bothering me. As you were...
Score: 4 Votes (Like | Disagree)
Read All Comments