In line with tracking information, a number of U.S. customers who pre-ordered LTE models of the iPad mini and fourth-generation iPad have either already received their shipments this morning or are seeing their packages out for delivery. 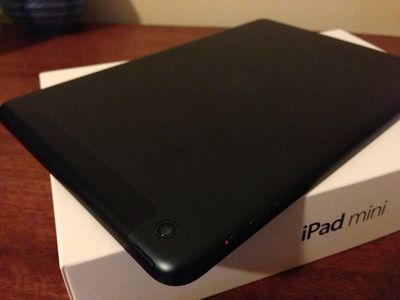 Verizon iPad mini delivered (Thanks, Joshua)
Our forums are beginning to fill with reports of iPad minis being delivered, while we're also starting to see reports of fourth-generation iPads arriving.

Apple has yet to announce when it will begin selling the LTE iPad mini and iPad models in stores, although stocks of at least the full-size iPad models have reportedly arrived at the company's stores and we had previously heard that AT&T was planning to begin selling the devices this Friday, November 16.

AdonisSMU
I can tell the difference and I just don't care. I like the iPad mini and that's good enough for me.
Score: 6 Votes (Like | Disagree)

dashiel
That’s the problem with looking at spec sheets and drawing conclusions. I’m looking at a 3GS here and a mini right now, to suggest the screens are even remotely comparable is laughable.
Score: 3 Votes (Like | Disagree)

stukick
Say what you will, but after owning every iPad that has been brought to market, the Mini is by far my favorite. The size alone makes the original iPad seemed out dated.
Score: 2 Votes (Like | Disagree)
Read All Comments