CNET is reporting that Judge Lucy Koh will "consider the questions" of whether the jury foreman in the Apple v. Samsung case conducted himself improperly during the jury selection process.

Jury foreman Velvin Hogan has been one of the more visible members of the jury, speaking with numerous media agencies about the case and the billion-dollar verdict awarded in the case. 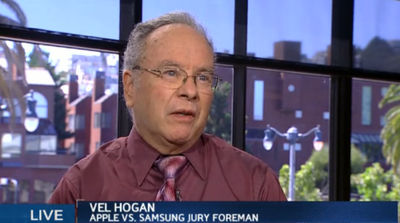 Koh said she will look into the matter during a December 6 hearing. As part of her inquiry, Koh said she will require Apple to disclose what information the company's lawyers knew about the jury foreman.

Samsung argued that jury foreman Velvin Hogan didn't disclose during jury selection that he had been sued by Seagate, his former employer. Samsung pointed out in court papers that Seagate and Samsung have a "substantial strategic relationship." The litigation with Seagate led Hogan to file for personal bankruptcy in 1993. Samsung maintains Hogan should have informed the court about the case.

Though the jury trial was finished earlier this year, Apple and Samsung's courtroom drama does not look to be abating any time soon.

seven2k7
stock is lowering......shake up in the ranks...now this decision will be thrown out cause Hogan liked talking. Karma is a bitch apple!
Score: 15 Votes (Like | Disagree)

samsung -> hire outsider -> outsider contacts foreman -> give him 10 mil to say he did his own research outside the case.

I won't give my opinion on the merits of the case. I will say that there was quite a bit that I find questionable about the foreman and how the jury deliberated.

And if this were a criminal court case and you were the defendant - I don't believe anyone here would want a jury member who had any remote/tangential bias.

A fair trial is a fair trial. And if Samsung (or Apple!) didn't get one - they are entitled to one.
Score: 12 Votes (Like | Disagree)

give it up samsung, you copied apple, it's a fact, and everyone knows it but you.

That would not be a wise business decision on Samsung's part and the fact you think they should give it up is a good enough reason why you should never be a CEO of a multi-billion dollar company. Whether Samsung copied or not, they are smart to fight this.

The contention that having some animus against Seagate means that one will also hate Samsung is total BS. Even if Samsung has some technology sharing or other agreements with Seagate. They are separate companies. Am I missing something other than Samsung's desperation.

Seagate is partially owned by Samsung. Also, the foreman broke the rules by bringing in outside evidence that wasn't presented in the case to the jury. At the very least, someone with such ties to Samsung or Seagate shouldn't have been allowed on the jury pool at all.
Score: 11 Votes (Like | Disagree)

LoloBond
Since this guy went on National television I said this will bite Apple in the ass... just watch..
Score: 10 Votes (Like | Disagree)

Lol
As for the judge wanting everything apple knew about the foreman that is weird. As far as I know you are not required to disclose information about jurors during jury selection.

Again if he did not actually lie there is nothing here but poor lawyering by Samsung.


You're the expert on everything is seems. Publishing. Patents. Law. Jury selection. Verdicts. etc. There doesn't seem to be a topic you don't try and school others on.

Fact is - it's just your opinion. No better or worse than anyone else's. Quite condescending however.
Score: 9 Votes (Like | Disagree)
Read All Comments

Friday January 15, 2021 1:46 pm PST by Juli Clover
Apple has started "early work" on an iPhone that has a foldable display, according to a new report from Bloomberg's Mark Gurman. Though testing of a foldable iPhone has begun, Apple has not committed to releasing a device that has a foldable display. Development has not yet expanded beyond a display and Apple does not have full foldable iPhone prototypes in its labs. Like foldable...
Read Full Article • 208 comments

Saturday January 16, 2021 6:00 am PST by MacRumors Staff
This week was sure a busy one in the Apple world, with a flurry of announcements out of CES early in the week followed by a rash of Mac- and iPhone-related rumors later in the week. The new rumors this week included details on updated MacBook Pro, iMac, and Mac Pro models, as well as a few other tidbits, so make sure to read on below to get caught up! Kuo: New MacBook Pro Models to...
Read Full Article • 43 comments

Sunday January 17, 2021 9:47 am PST by Hartley Charlton
Twitter user @DongleBookPro has today shared images of a prototype iPhone 5s in an unreleased Black and Slate color. The iPhone 5s was launched in September 2013. The device featured Touch ID, a 64-bit processor, and a True Tone LED flash for the first time. Other new features included a five-element lens with an f/2.2 aperture, a 15 percent larger camera sensor, Burst Mode, and Slo-Mo...
Read Full Article • 57 comments

Friday January 15, 2021 6:17 am PST by Hartley Charlton
Incoming Intel CEO Pat Gelsinger has said that the company must "deliver better products" than Apple, which he described as a "lifestyle company," and says that Intel's best days are "in front of it" (via The Oregonian). Speaking at an Intel all-hands meeting yesterday, Gelsinger derisively implied that Apple is merely a "lifestyle company," so Intel must be able to surpass its technology: ...
Read Full Article • 281 comments