Notoriously difficult video game classic Dragon's Lair has arrived on OS X nearly thirty years after its original release on LaserDisc. The game features video transferred directly from the high definition film master. Ports of the game have previously been released for both iPhone and iPad.

Dragon's Lair was unlike any other video game when it was released back in 1983. Instead of using low-definition sprites, the game used more traditional animation to show game play, with the user executing actions by timing sword swings or other button presses to correctly to clear each level. 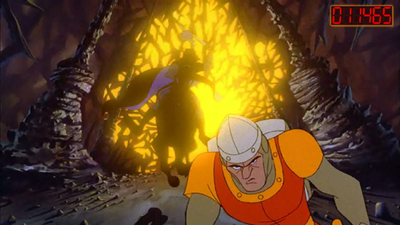 You control the actions of the daring adventurer, finding your way through the castle of a dark wizard, who has enchanted it with treacherous monsters and obstacles. In the mysterious caverns below the castle, your odyssey continues against the awesome forces that oppose your efforts to reach the dragon’s lair. Dragon’s Lair is a fully animated classic arcade game from legendary animator Don Bluth. You’ll make your way through the castle and caverns below and wield your sword against some strange creatures. Beware of your foes, as they are numerous!

Dragon's Lair is available for $9.99 on the Mac App Store. [Direct Link]

LaDirection
My first memory of this in the arcade:

Pop in a quarter. "Wow, there's a cartoon playing!"

I have it on my iPhone.


Yeah but I have the original console in my house.
Score: 7 Votes (Like | Disagree)

The novelty of Dragons Lair (sounds like "Dragon Slayer") was the animated cartoon graphics by using a 12" laser disk. Before this game, graphics were generally black backgrounds with primitive 8 or 16 bit jagged images. Dragon's Lair was the first upright video game to price at 50¢ per play, from a quarter, and had kids lined up to play. Until they got bored.


And now, kids pay 99 cents one time to carry an awesome video game in their pocket with them all the time, and they complain its too expensive! :)

Spending $5 at the arcade every Saturday would be like an $80 a month App Store habit these days. Crazy.
Score: 5 Votes (Like | Disagree)

tdiaz
I can still remember that first time I saw the thing, in a Show Biz Pizza Place location. I saw the graphics, then looked down and saw the coin door.

About the time Space Ace came out, I was able to score a machine because the Pioneer 7820 LaserDisc player had gone stupid. I learned how to align them by hand, and replace laser tubes. It was a lot of fun back then. Word got around.. and within a couple years I had 6 of them, and had fixed many others. I put them on location with the laserdisc players suspended on air cushions and would bolt two or three cabinets together if I had two or more games at one location. That way they were much harder to kick and rock back and forth. Mine tended to last a lot longer that way.

Space Ace and Thayer's Quest made me quite a bit during my high school years. It was really cool, I could write my own reports for Work Experience credit, since I had game route during the last two years of high school. With a flat bed pickup, it wasn't uncommon for me to have game machines on the back, and sometimes at Lunch, if I had pinball machines I'd run an extension cord from a near by building and let people play since they were at the right height when they were on the back of the truck, with the legs removed.

But it is much more fun .. on the laserdisc based system. The computer ports just don't do it for me.
Score: 5 Votes (Like | Disagree)

Yeah but I have the original console in my house.