As noted by CNET, Apple has tweaked its international sites to remove code that automatically pushed footer text including a court-order acknowledgment that Samsung had not infringed the protected iPad design in the UK below the scroll unless the user's browser window was extremely tall. 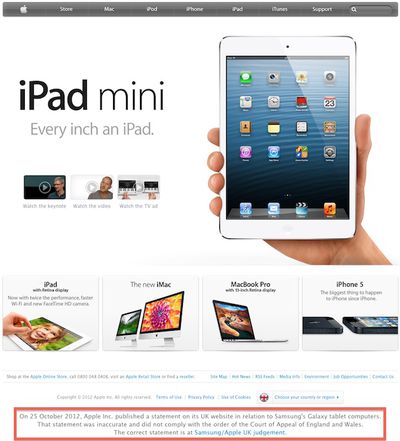 While Apple has used such vertically responsive design before to automatically adjust page layouts based on browser window size, its use on the company's international front pages (but not the main apple.com page) was seen as an effort to hide the notice on its UK page.

The international pages are now using the same layout as the main apple.com site, alternating between the iPad mini and the fourth-generation iPad as featured products and keeping a static layout. Previously, images within the iPad mini feature linking to the keynote and product videos automatically moved to underneath the feature section as the browser window was made taller, pushing the footer text where the Samsung acknowledgement was out of view unless the page was scrolled.

All Taken
I understand the need to be protective of your design but if a Judge delivers a verdict you should be adult about it and just place the damn notice clearly instead of acting like a smart arse teenager.

Practice what you preach and grow up Apple.

The Judge isn't treating Apple like a child by giving this order which so many Macrumors readers naturally leap to assume, it is simply that the Judge felt Samsung didn't infringe on Apple's iPad design and that as a result of the court case Apple tarnished Samsung's reputation given the media attention.

When brand reputation is a MASSIVE part of your business model then it needs to be protected. If it were the other way around then I'm sure the Judge would have demanded the same of Samsung given the reliance of both companies on brand reputation.

I won't comment on the merit of the decision as I, simply put, am not a Judge.
Score: 27 Votes (Like | Disagree)

Geez, just do it right and get it over with. The sooner they comply, the faster this will all go in the past and be forgotten.


The silly thing is that it all started with only the requirement for a tiny link that no one would even notice.

Instead it ends up being a big apology that's hard to miss.


Quoting the judge wasn't the problem.

Apple also added a bunch of comments that were worded in such as way as to make it sound like Samsung was banned for infringing the iPad design in other countries.

Not only is there no such injunction currently in place, this and the other trials were about the 2004 Community Design, NOT the 2010 registered iPad design.

That's what got them in trouble (again).

It's all juvenile. Forcing an apology? This judge is ridiculous


Apple themselves had demanded before trial that Samsung should be forced to post an apology if they lost. The judge took that into account. Turnabout is fair play.
Score: 14 Votes (Like | Disagree)

They broke the court order, the court explicitly told them what to put on the note.

And it has nothing to do with free speech, they can say what they want wherever they want EXCEPT in the court order
Score: 14 Votes (Like | Disagree)

andyjam
I'm genuinely surprised that Apple didn't use a white font for the online apology...
Score: 13 Votes (Like | Disagree)

Did you guys even read the article?

Sure did, Apple have tried to neutralise the verdict in a previous notice by using jest full word play, then they tried hiding the notice by altering page layout.

All signs of Apple refusing to abide by what the ruling required. It was a simple demand of the court that should have been executed without this farce.