Apple today announced that it has sold a total of three million iPads since the launch of the iPad mini and fourth-generation iPad on Friday. The number was not broken down into separate counts of iPad and iPad mini sales. 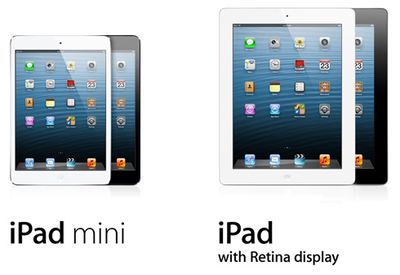 Topeka Capital Markets analyst Brian White has also released a new research report indicating that the iPad mini was completely sold out at 60% of surveyed U.S. Apple retail stores this weekend, with 16 GB models in both colors sold out at 100% of surveyed stores.

I was one of those 3 million and I'm a happy mini owner
Score: 20 Votes (Like | Disagree)

why would you want the competition to fail, so apple can slack?

Hell, if I was in the market for a tablet, the Surface would be my top choice. I still don't get the fact that on the iPad, I can't have a Netflix video playing while replying to iMessages (two apps open on the same screen). The Surface can do that but the iPad is stuck in this 1980s "One App At A Time" idea. Other examples:


* Having Safari open, with iTunes playlist docked to the side.
* Pinning a Calculator to the side of Any app for easy calculations


I hope Surface/Nexus' catch on so that Apple can truly innovate!
Score: 12 Votes (Like | Disagree)

Hell, if I was in the market for a tablet, the Surface would be my top choice. I still don't get the fact that on the iPad, I can't have a Netflix video playing while replying to iMessages (two apps open on the same screen). The Surface can do that but the iPad is stuck in this 1980s "One App At A Time" idea.

I hope Surface/Nexus' catch on so that Apple can truly innovate!

The iPad can do that but first, I'd like for you to explain the experience of watching a movie with half of an already split of the 9.7" screen covered by a keyboard while you type an iMessage...

The way Apple deals with the kind of multi-tasking that does work with 2 apps being actively used at the same time is that you can listen to music in the background as you browse the internet for example. With Netflix, you can in fact watch a movie while you iMessage. AirPlay takes care of that. You can play a movie in the Netflix app, AirPlay it to a screen that you can see without keyboards in the way and then switch to iMessage and your movie continues to play.

People who think your screen should be cluttered up with apps don't care about the user experience, and that's perfectly fine. There are plenty of other tablets for those people.
Score: 10 Votes (Like | Disagree)

Amplelink
3 million of anything is nothing to sneeze at, but their unwillingness to share iPad mini numbers is curious. As is Tim Cook's pronouncement that they "practically" sold out of iPad minis.
Score: 10 Votes (Like | Disagree)
Read All Comments

Thursday January 27, 2022 12:08 pm PST by Juli Clover
Apple today seeded the first betas of iOS 15.4, iPadOS 15.4 to developers for testing purposes, adding a slew of new features to the latest iOS operating systems. iOS 15.4 is the biggest update that we've had to iOS 15 to date, and it brings Universal Control, Face ID with a mask, new emojis, and tons more. Face ID With a Mask With iOS 15.4, there is now an option to unlock your iPhone...
Read Full Article • 85 comments