Close on the heels of its iPad mini teardown, iFixit has performed a similar procedure on the fourth-generation iPad. The new iPad is extremely similar to the previous model, with the main exceptions being the move to a more powerful A6X chip and a change to Apple's new Lightning connector. 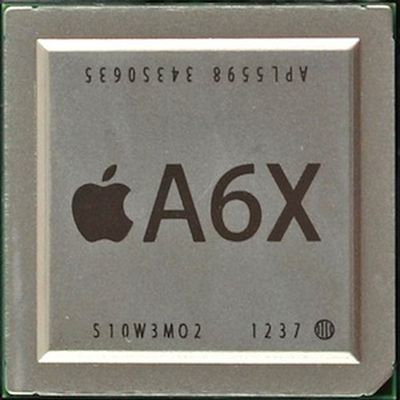 Of most significant interest is of course the A6X chip, which would be an enhanced version of the A6 chip that debuted in the iPhone 5, with improved graphics to help drive the iPad's large Retina display. A date code on the A6X reveals that it was manufactured in the 37th week of 2012, which corresponds to mid-September, but a more detailed analysis of the A6X will need to wait for chip teardown experts such as those at Chipworks to get their hands on the part.

Other interesting discoveries include:

- The display is manufactured by LG, as opposed to the Samsung display found in the third-generation iPad torn down by iFixit. Apple does, however, source many of its components from multiple vendors, so it is unclear whether Apple has excluded Samsung from display production on the fourth-generation iPad.

- The logic board remains the same size as in the previous model, but Apple has tweaked the layout of some of the chips.

- The battery carries the same A1389 part number as in the third-generation iPad.

- Just like in the third-generation iPad, the fourth-generation model contains 1 GB of RAM housed in two Elpida chips separate from the A6X package.

Update: Chipworks has examined the A6X, finding that it is indeed a significant reworking of the A6 found in the iPhone 5, unsurprisingly focused on graphics capabilities.

This is not just an A6 with a couple minor tweaks. The A6 is 94mm2 while the A6X is 123mm2 – a full 30% larger.So where did that extra area go? Well, firstly, it did not go to the CPU core. The A6X uses the identical CPU to the A6. Same size, same layout. This is not surprising given that the prior CPU used custom layout techniques, and therefore it would be a huge amount of work to redesign so soon. Much of the extra area has gone to the GPU cores which are up from 3 to 4. More notable is that each of these GPU cores is much larger.On the A6X each GPU core is 8.7mm2 while the A6 GPU cores are only 5.4mm2. The overall area occupied by the A6X GPU cores is more than double that of the A6!

chriscrk
It reveals the lightning connector?! Never would have guessed!
Score: 19 Votes (Like | Disagree)

ipedro
Doesn't look like they used the extra space in this revision.

This reveals that the iPad 4 was only released to bring the Lightning connector to the entire iOS lineup and they might as well have added a faster chip.

I'll wait for the iPad 5 or the iPad mini 2 with retina display.
Score: 9 Votes (Like | Disagree)

So Apple relies only on it's main competitor for it's top quality retina display, yet decides to have a less competitive, not threatening company produce it's lesser displays? Where's the logic in that?

Maybe the logic is that by buying from LG, Apple is able to acquire similar (or even slightly better, IMHO) quality displays from a "non-threatening" company at lower costs while at the same time reduce business dealings with its perceived No. 1 enemy (Samsung)? :confused:
Score: 8 Votes (Like | Disagree)

monkor
Good thing they saved all that room in switching to a lightning connector to add cool new features
Score: 7 Votes (Like | Disagree)

So Apple relies only on it's main competitor for it's top quality retina display, yet decides to have a less competitive, not threatening company produce it's lesser displays? Where's the logic in that?


Actually no. LG is the company from which Apple is now getting their top quality retina display, whereas Samsung, from whom the display does not come, is their top competitor. The logic is right there!
Score: 6 Votes (Like | Disagree)

I realize that this is probably a non-issue, but as inexpensive as RAM is these days, why only 1GB of RAM? I remember when they finally went from 512MB to 1GB in the iPhone, RAM is ridiculously cheap these days and Apple certainly charges enough for their products it seems as though 1GB is not enough.


Because Apple isn't about being the best. It's about selling stuff. They create a demand for things like features etc. -- keeps people excited. Also turns some into rabid, frothing disgruntled users who thought they bought THE latest thing xx months/days ago. Why didn't they add a Retina Display either? Clearly Apple holds back on these things so that they can sell you the next iteration and say how revolutionary it is ... to have everything the prior model should have had.
Score: 5 Votes (Like | Disagree)
Read All Comments