Just as Apple begins sales of the fourth-generation iPad and the iPad mini today, the embargo has lifted on reviews of Google's Nexus 10 tablet announced earlier this week. The device, which is manufactured by Samsung, builds on the relative success of the Nexus 7 to go head-to-head with the full-size iPad with a screen packing even more pixels than Apple's iPad Retina display. 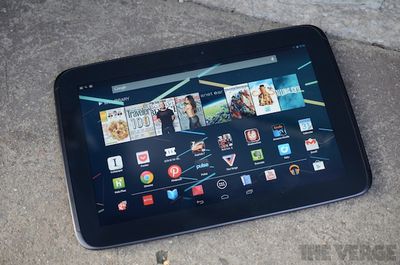 While tablet manufacturers have been able to make inroads on the market by targeting smaller 7-inch screen sizes, they have had less success competing directly against the full-size iPad. But as each new device packs in the latest features and specs, it is interesting to see how they compare to the iPad, which Apple has tried to keep at the head of the pack with its latest update offering double the performance compared to its predecessor.

We'll type it again just because it's kind of neat: 2,560 x 1,600. That's an awful, awful lot of pixels in just a 10.1-inch PLS LCD panel -- way more than a 1080p HDTV contains. That it's in something that comfortably can be carried around, and that can be acquired for under $400, is quite a marvelous feat. It's good to live in the future.

And, indeed, things look fantastically sharp here. Text is rendered incredibly crisply and the UI looks better than ever. The first-party icons are all crisp and clean, though many third-party app icons do look like they could use a new, higher-resolution rendering. Thankfully, the apps themselves overwhelmingly look fine.

The Nexus 10 feels like Google's open letter to developers. "Look how great Android tablets can be," the company seems to be saying, "if only you'd make great apps!" The Nexus 10's display is every bit the Retina's equal, the build quality is excellent, and it even has a half-decent set of speakers. Android 4.2 is more stable than ever, and Android does a lot of great things iOS simply doesn't. But you take it out of the box, say it's beautiful and fast... then what? Apple's tablet has 250,000-plus other apps that look and work great on a huge, high-res screen, and Android's ecosystem is leagues behind. The Nexus 10 is a great way to watch movies, but there's absolutely no way it's going to replace your laptop the way the iPad could.

The Nexus 10, built by go-to Google partner Samsung, feels like it’s built for working and playing. It’s grippy and rubbery, and the edges have this gentle slope that fits in hands in a variety of ways. You can hold it with one hand. I found my favorite way to use it was resting on the palm of one hand, like a painter’s palette, using it with the other hand. I’d never do that with an iPad.

It’s time for Google to step up to the plate and control the entire experience of Android and hardware. Does that mean that other hardware manufacturers should get the shaft? Maybe not, but I think Apple’s #1 genius move is that it controls the hardware and software.

Apple has an advantage, but Google is right there on the cusp of something amazing. Maybe you don’t agree with my statement that Android has a leg up for the tablet experience, but it’s worth thinking about.

Overall, reviewers seem to feel that the Nexus 10 is a quality tablet that is still being held back by issues with Android and content, although TechCrunch remains impressed by the tablet experience on Android. With pricing starting at $399 for a 16 GB model, those looking for an iPad alternative are hoping that momentum at the 7-inch size will help drive developers to better optimize the Android tablet experience and provide a viable competitor for the full-size iPad.

The Nexus 10 feels like Google's open letter to developers. "Look how great Android tablets can be," the company seems to be saying, "if only you'd make great apps!" The Nexus 10's display is every bit the Retina's equal, the build quality is excellent, and it even has a half-decent set of speakers. Android 4.2 is more stable than ever, and Android does a lot of great things iOS simply doesn't. But you take it out of the box, say it's beautiful and fast... then what? Apple's tablet has 250,000-plus other apps that look and work great on a huge, high-res screen, and Android's ecosystem is leagues behind. The Nexus 10 is a great way to watch movies, but there's absolutely no way it's going to replace your laptop the way the iPad could.

Okay, so I didn't read the full article, so maybe that's why I'm confused, but I'd imagine an Android tablet being a lot more capable of replacing a laptop than an iPad :confused:
Score: 25 Votes (Like | Disagree)

NIKKG
Apple stock dropped today under $590. It was over $700 a month ago, seems like the bubble is deflating.
Score: 24 Votes (Like | Disagree)

The Nexus 10, built by go-to Google partner Samsung, feels like it's built for working and playing. It's grippy and rubbery, and the edges have this gentle slope that fits in hands in a variety of ways.

That's one thing I hate about Apple's product. The shiny shell is next to useless for a regular human being. I prefer holding my e-ink Kindle (rubbery back) than my iPod touch (stainless steel back).

Yes we can buy a shell for the Apple products, but it's still a flaw. Once again functionality loses over looks. These products are made to be used, not to be looked at on a display.
Score: 20 Votes (Like | Disagree)

Peppa
Trading in my iPad for a Nexus...after being able to customize the hell out of my galaxy s3 and in turn use it more efficiently...the iPad just feels frustratingly locked down.

I also like grippy rubber like that on the kindle over the cold metal on the iPad.

Google wins for my uses.

IMO Apple needs to do something new before consumers begin to shift...perhaps recent management shake-up is indicative of this.
Score: 19 Votes (Like | Disagree)

bushido
i cant wait to get my Nexus 4! time to try something new :) still love the apple ecosystem but i fell in love with Google Now and they got some great innovative features coming up
Score: 19 Votes (Like | Disagree)
Read All Comments