Reuters reports that the early lines for Apple's new iPad mini seem to be shorter than for previous product launches. They note that about 50 people waited at the Apple Store in Sydney, Australia and about 100 or more outside Apple Stores in Tokyo and Seoul. Reuters notes that in the past, the line at the Sydney store "stretched for several blocks" for iPhone launches. 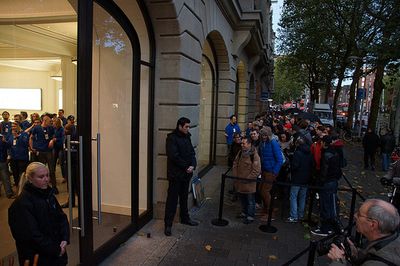 Amsterdam Apple Store / Image by Floris Looijesteijn
Lines were certainly forming in several locations such as Amsterdam (above), as well as Munich and Florida, though the Covent Garden Apple Store reportedly attracted very few customers this morning. The line to Apple's flagship 5th Avenue store also started forming quite late, though launch enthusiasm in New York was certainly tempered due to the devastating effect of Hurricane Sandy on the city earlier this week.

The iPad Mini was available for pre-order starting last week and persisted in availability throughout last weekend. Apple is also launching the 4th Generation iPad today. Both products should be available at retail stores starting at 8am this morning. Of note, the LTE / Cellular enabled version of the iPad Mini will not be available until Mid-November. Only the Wi-Fi version is available today.

mrbunglez
I guess you can say the lines were "mini"? Heheehehe
Score: 56 Votes (Like | Disagree)

leon44
Hardly surprising given it's not really a flagship product, it's like queueing for the new iPod touch
Score: 45 Votes (Like | Disagree)

zeemeerman2
Fixed the title for you.
Score: 13 Votes (Like | Disagree)

Rogifan
Shorter lines compared to what? And who, besides media or stupid wall street analysts were expecting long lines at the stores? Why is this even a story? :rolleyes:
Score: 12 Votes (Like | Disagree)

nfl46
Some probably want to check it out in person before buying it.
Score: 12 Votes (Like | Disagree)
Read All Comments

Friday May 20, 2022 8:55 am PDT by Juli Clover
Apple is working on an updated version of the HomePod that could come in the fourth quarter of 2022 or the first quarter of 2023, according to Apple analyst Ming-Chi Kuo. Kuo says that there "may not be much innovation in hardware design" for the new HomePod, and there is no word on what size the device will be and if it will be a HomePod mini successor or a larger speaker. Apple would ...
Read Full Article • 200 comments