Apple's iOS devices have long carried at least partial support for emoji, picture characters popular for text messaging in Japan but also gaining interest in countries around the world. Initially the feature was unlocked only for Japanese customers, but over time the company has broadened access to emoji and now supports several hundred emoji characters for all users once they enable the special emoji keyboard. 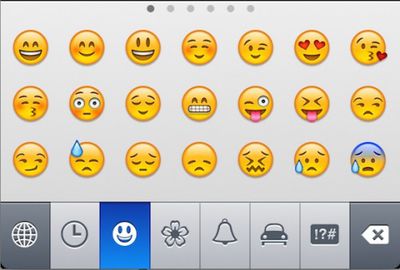 With iOS 6 bringing expanded emoji support, it appears that Apple is beginning to address the significant number of emoji apps in the App Store, sending out notices to developers informing them that their apps have been removed from the store because they are no longer useful given the built-in emoji support now available. MacRumors has heard from several developers who received such notices, and a number of other developers have mentioned them on Twitter, so it does appear to be a concerted effort by Apple.

We are writing to let you know your app, XXXX, has been removed from the App Store because it is no longer needed to unlock Emoji.

Since iOS 6 now provides Emoji support to all users, your app is no longer in compliance with the App Store Review Guidelines <https://developer.apple.com/appstore/resources/approval/guidelines.html>

2.12 Apps that are not very useful, are simply web sites bundled as apps, or do not provide any lasting entertainment value may be rejected

Thank you and best regards,

While Apple's notices state that the apps have been removed from the App Store, they do in fact seem to still be available, so it is unclear exactly what Apple's timeline for taking the apps down may be.

A number of the developers have noted that Apple seems to be targeting any app listing emoji among its features, not just those that are designed solely to enable emoji characters. Consequently, these developers argue that their apps are indeed useful and provide functionality beyond that offered in iOS 6 itself.

2.12 Apps that are not very useful, are simply web sites bundled as apps, or do not provide any lasting entertainment value may be rejected

chainprayer
What about people with older devices that don't want to or can't upgrade to iOS 6?
Score: 20 Votes (Like | Disagree)

Some of them were even charging money for something that is built in.
Score: 14 Votes (Like | Disagree)

2a) I hope Apple allows new apps to be submitted if they are for iOS 3.x and 4.x devices *AND* specify in the description that you do not need to use a program if you are running iOS 5.x or newer.

Thursday September 29, 2022 7:44 am PDT by Juli Clover
The iPhone 14 Pro and Pro Max introduce some major improvements in camera technology, adding a 48-megapixel lens and low-light improvements across all lenses with the new Photonic Engine. We've spent the last week working on an in-depth comparison that pits the new iPhone 14 Pro Max against the prior-generation iPhone 13 Pro Max to see just how much better the iPhone 14 Pro Max can be. Subscrib ...
Read Full Article • 108 comments

Thursday September 29, 2022 12:38 pm PDT by Juli Clover
Tony Blevins, Apple's vice president of procurement, is set to depart the company after he made a crude comment about his profession in a recent TikTok video, reports Bloomberg. Blevins was in a video by TikTok creator Daniel Mac, who was doing a series on the jobs of people he spotted with expensive cars. After seeing Blevins in an expensive Mercedes-Benz SLR McLaren, Mac asked Blevins what ...
Read Full Article • 544 comments