BGR posts what it claims to be photos from a new iPad's display assembly. BGR refers to the part as an "iPad 4" part but is somewhat uncertain about exactly what the part could represent.

Apple is believed to be working on a revised full-size iPad (in addition to the iPad mini) that could also be launched on Tuesday as part of their media event. The new iPad would have a lightning connector and expanded LTE support. And, according to BGR, could have an improved FaceTime camera: 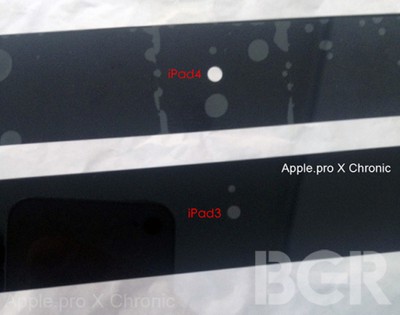 The most noticeable changes we can see are the fact that the front-facing camera cutout is larger than the previous model, allowing Apple to include a bigger sensor.

A larger sensor could allow for a higher quality camera. At the moment, the iPad's front camera offers "VGA-quality" photos. Notably, the iPhone 5's front-facing camera was upgraded to 720p video and 1.2MP photos, suggesting this is a direction they could also take the iPad.

BGR acknowledges that the part, however, could be for a future iPad update.

DestroVega
Anyone selling their 7-month-old iPad to get a tweaked new one is just insane to me. If you want a smaller mini I could understand but jeez. I had a hard time justifying the jump from iPhone 4 to 5 to myself. They could make the tweaked iPad 1.5x faster and I'd still be fine with the 7-month old "obsolete" model.
Score: 20 Votes (Like | Disagree)

sabu213
My "New Ipad's" response to all these leaks

My "New Ipad's" response to all these leaks
Score: 13 Votes (Like | Disagree)

slimbek
I can definitely see the Apple website frontpage showing a refreshed fullsize iPad and new iPad Mini together with some fancy headline about how its all in the family or some such.

Otherwise:
1) the Mini will have no clear sense of scale vs the normal iPad when just looking at website pics
2) Showing 2 family products side-by-side with different dock connectors doesn't make sense for Apple.

AustinIllini
I'm still not convinced they'll call it the iPhone 5.

But seriously, a small delta improvement is no big deal as long as Apple doesn't expect it to be earth shattering.
Score: 10 Votes (Like | Disagree)
Read All Comments

Tuesday July 7, 2020 6:49 pm PDT by MacRumors Staff
Apple is planning on launching the iPhone 12 this fall which is rumored to be coming in 3 different sizes: 5.4", 6.1" and 6.7". The middle size (6.1") matches up with the currently shipping iPhone 11, but the other two sizes will be entirely new. Over the weekend, there was some excitement about how well the new 5.4" iPhone 12 compares to the original iPhone SE. Those who have been hoping...
Read Full Article • 136 comments

Wednesday July 8, 2020 9:35 am PDT by Joe Rossignol
Despite multiple reports indicating that Apple will not include EarPods or a wall charger with iPhone 12 models this year, one analyst believes that pricing will still increase slightly compared to the iPhone 11 lineup. In a research note provided to MacRumors, analyst Jeff Pu forecasted that iPhone 12 pricing will start at $749 for a new 5.4-inch model, an increase of $50 over the base...
Read Full Article • 238 comments