Next month, Apple will meet with accessory makers in Shenzhen, China to discuss integration of the new Lightning connector in third party products, according to a report from TechCrunch. The MFi Program allows manufacturers to obtain the hardware components necessary to connect iPhones, iPods and iPads to third party docks, cars, and other such devices. 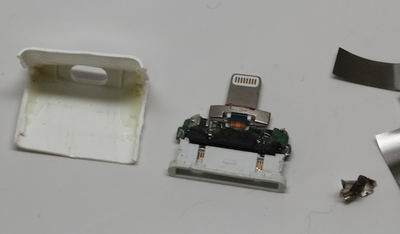 However, in a change from the previous dock connector, TechCrunch says Apple will be keeping very tight control of the new Lightning connector:

One of those new rules, according to one of our sources close to the program, is that Apple’s Lightning pin supply is controlled by the company itself, and it supplies approved MFI partners with production quantities of the pin once their product is determined to have met its standards and specifications. It sells them in volume, and our source says the pricing is actually very fair when you consider the advanced technology involved in the connector’s construction.

An earlier teardown of the Lightning connector showed some specialized hardware inside the connector itself, including chips that could be used for security.

That said, Chinese companies are said to have cracked the security protocols already, and are in the process of ramping up Lightning component production. The meeting, reportedly scheduled for November 7 and 8, is a first step towards development of new Lightning-compatible products.

Apple did say during the iPhone 5 launch event that some companies including Bose, JBL, B&W and B&O were already working on devices compatible with the new connector. However, we haven't heard any concrete availability dates for new Lightning-compatible devices.

731729
They're meeting with accessory makers next month? They're already running about a month late.
Score: 38 Votes (Like | Disagree)

absurdamerica
Apple screwed this up in just about every way possible.

1. Provide even a superficial performance boost by making the cable USB3
2. Engage manufacturers early so that when the phone came out their partners could benefit from increased dock/accessory sales.


Honestly, all this has been nothing but an inconvenience for the customer and if I was an accessory maker I'd be furious heading into the holiday season with no iPhone5 ready products to drive holiday sales.
Score: 35 Votes (Like | Disagree)

samcraig
Tighter control translation: We want to make money off of every accessory that connects to the iPhone.
Score: 20 Votes (Like | Disagree)

Apple screwed this up in just about every way possible.

1. Provide even a superficial performance boost by making the cable USB3

I don't think you understand what superficial means. No rational engineer would do something superficial.

Many have pointed out that the write speeds of the iPhone's flash memory doesn't even saturate USB 2.0's maximum speed. They have also pointed out that the "Lightning" connector itself is likely USB 3.0 compatible; all it needs is the right chips in the iPhone — which would be silly to put in when the speed is unusable at this point.

This kind of superficiality you advocate is what leads to Android phones with specs to make your head spin but which don't perform anywhere near as smoothly as the iPhone. So why don't you go buy a Samsung Galaxy SXVI 5G LTE-X running Android 6.7 'Every-Flavour Jelly Bean' with Olive Oil Smoothness Enhancement, which, of course, pointlessly supports USB 3.0 via its fragile Micro-USB port.
Score: 18 Votes (Like | Disagree)

Tighter control translation: We want to make money off of every accessory that connects to the iPhone.


That, or you could look at it as they are looking to work with manufacturers to ensure future products provide the best possible experience for customers of both companies. Wouldn't it also be worth their while to ensure the first 3rd party accessories that pair with Lighting work well?
Score: 18 Votes (Like | Disagree)

FSMBP
Would have made more sense if the meeting was held Sept. 13th...

Apple screwed this up in just about every way possible.

1. Provide even a superficial performance boost by making the cable USB3

From what I've read, USB 3 would not have affected any performance in the iPhone. The bottleneck in the iPhone is the memory chip, which is slower than USB 2. So you wouldn't see any benefit from 3.0.

Once Apple gets faster chips, they update Lightning to USB 3.0 (probably in a couple years).
Score: 17 Votes (Like | Disagree)
Read All Comments