Thursday October 11, 2012 8:16 am PDT by Eric Slivka
The teardown experts at iFixit have turned their attention to Apple's fifth-generation iPod touch, moving quickly to examine the internals of the company's redesigned device.

The teardown reveals few surprises, but offers a good look at how Apple has been able to pack all of the components into a body that has 20% less volume than the iPhone 5. With a lack of cellular communications technology, the iPod touch carries fewer components and consolidates them into just a handful of parts. Most notably the logic board and battery are smaller than seen in the iPhone 5 and carry a top-and-bottom layout as opposed to the side-by-side layout seen in the iPhone. 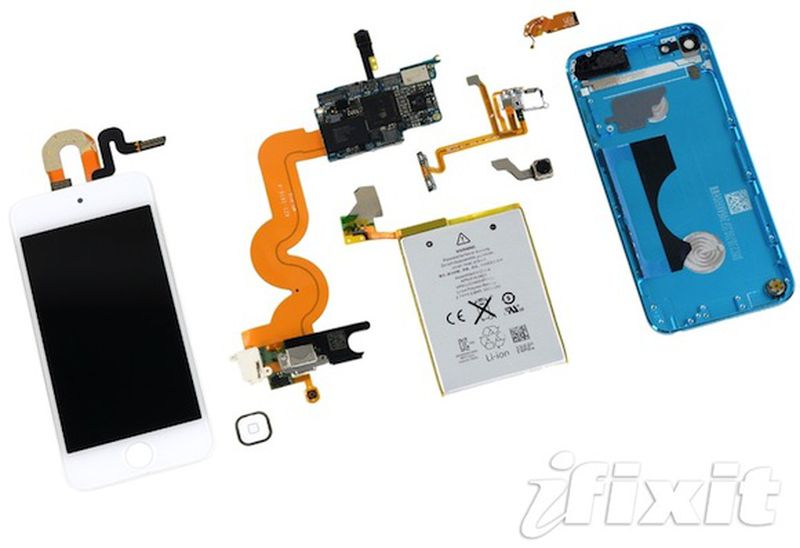 One aspect of the teardown that did catch our eye is the Lightning connector and headphone jack assembly, which contains a long ribbon cable extending from those ports at the bottom of the device up to the logic board at the top. This part was seen several times back in August and was at the time claimed to be for the "iPad mini".

Those claims led to confusion over whether the iPad mini's headphone jack would be located at the bottom as on the iPhone 5 and the iPod touch or on the top as in the full-size iPad and as seen in mockups and cases reportedly based on leaked iPad mini design specs. With the appearance of this part in the iPod touch, the discrepancy has now been resolved and signs are pointing to the iPad mini's headphone jack being along the top edge of the device. 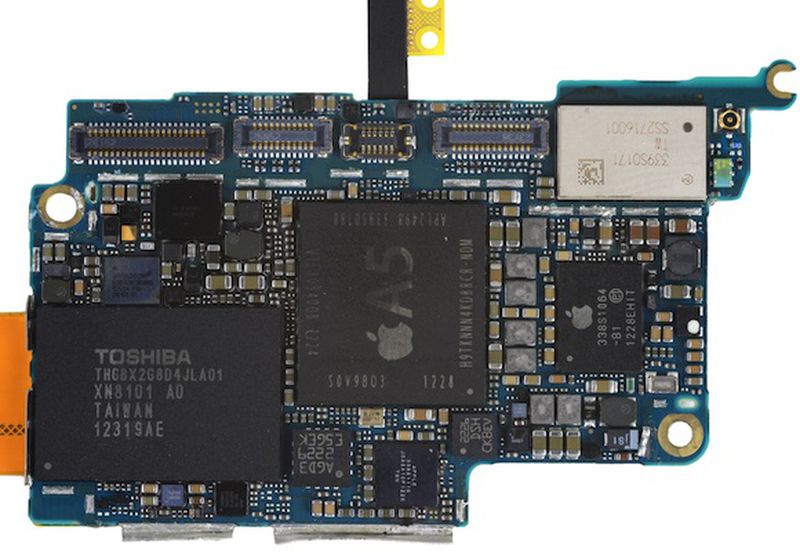 Other aspects of the device are fairly standard, with the logic board revealing Apple's A5 system-on-a-chip, flash storage from Toshiba, and the usual assortment of chips for handling Wi-Fi, touchscreen functions, gyroscope, and more.

Overall, iFixit found the new iPod touch to be difficult to repair, with many components soldered together and the device held together with adhesives and clips that make it difficult to open. The revelation is not a surprise, as Apple does not intend its mobile products to be user-serviceable and the company's efforts to push the limits of design and size reduction have led it to sacrifice accessibility.


Right, because that's what people really want to do with their Ipods: repair them.

Right now there are people tearing open the package containing their brand new iPod Touch, putting a screw driver to it, finding it diffucult to repair and howling to the heavens:

Seriously, the market has spoken. People value small size and improved battery life over repairability. If Apple made it larger or made the battery smaller in order to make it more repairable, people would be less willing to pay $300.
Rating: 28 Votes

iPod Touch for at least the first 3 generations were at least as fast or slightly faster than their iPhone counterparts cause it was "tweaked" as a gaming device.

Now iPod Touch is the step sister to the iPhone. Never getting the lastest gen specs.

For $299. I can find a very good condition or mint iPhone 4S 16GB. Some of which still have 4-6 months of warranty left on craigslist.
Rating: 8 Votes

What isee said. Seriously guys, about .0001% of users would trade thinness for the ability to tear open their iPod and fiddle with things. If you're in that small group... Well, sorry. The market isn't on your side.

People who are into tech often forget how not normal they are. And I say this as someone who loves techies. I really do. But if you're here, talking about this, then you are not normal. Even those of us who are casual techies are still way outside of the bellcurve. We are outliers and we shouldn't forget that - these design choices aren't made with us in mind.

I posted the same thing other day but I'll repeat it again because I think it is a valid point. The way Apple treats the Touch really annoys me. First off they hamper it with a previous generation cpu and half the ram vs the iphone. Second they use a cheaper screen. Third a weaker previous generation camera. Fourth no gps. And to top it off they charge the same price as an iphone. So by all outward appearances you are getting an iphone minus the cell chipset but in reality they cut corners almost everywhere and give you a cheaper built product. They can of course choose to do that, but then cut the price. And yes I realize an unlocked iphone is more expensive but then again I can buy an iphone from any carrier for those cheaper "subsidized" prices right now, so the comparison holds.
I've owned a few Touch's and think they are cool devices. But lower the darn price already.


The iPhone 5 with 32GB of internal storage is £599 here in the UK. The entry price new iPod touch has the same internal memory and costs £249. I don't know how you make that the same price. For £249 this is one hell of a good device. Brilliant screen, screaming fast processor, HD video recording, facetime, Siri. This is a great little device for that money and not nearly as expensive as the iPhone 5.
Rating: 7 Votes

QCassidy352
What isee said. Seriously guys, about .0001% of users would trade thinness for the ability to tear open their iPod and fiddle with things. If you're in that small group... Well, sorry. The market isn't on your side.
Rating: 7 Votes

turtlez
lol @ people complaining you cannot repair it. Same kind of thing as non user replaceable battery. Ask how many people replace the battery in their smart phones (non iPhone) and I bet less than 1% have. I have had a nokia 6220 since 2005 and the battery is still fine.

Hilarious how people use it as an argument not to buy from Apple. They always get caught out when I say "Yeah I would never buy from Apple because I cannot replace the battery in 10 year time!"

Looks > Replacing battery in 10 years when your phone will be extinct just in the hardware performance department.

Why buy a battery for a laptop that can only run windows 3.1? Get me?
Rating: 5 Votes

With no apparent reason for the curve in the cable, we can only assume Apple put it there for ****** and wiggles.


That's what Applecare is for...
Rating: 5 Votes

I'm sure there are a lot of people who prefer repairability over Apple's obsession with thinness.

Really? Where are they? Links? Stats?

It is really easy to make up stuff isn't it?
:rolleyes:
Rating: 4 Votes