Photos of parts for the next-generation iPhone and the rumored iPad mini continue to leak, with repair firm iResQ posting new photos of what are said to be the dock connector/headphone jack flex cable parts for both devices. Each of the parts is available in both black and white, indicating that Apple will be coordinating the dock with the bodies of the devices. 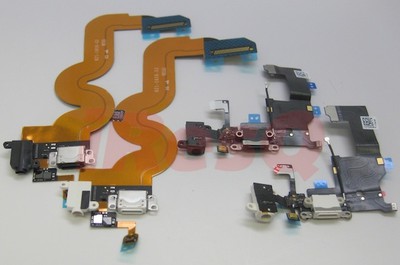 Like the photo that leaked earlier this week, the iPad mini parts curiously show the headphone jack at the bottom of the device. That placement is inconsistent with case leaks and other claims made thus far, which have indicated that the jack would be at the top of the device as on the full-size iPad.

These new iPad mini part photos also reveal a newer part number than seen on the previous part leak. These new photos appear to carry a part number of 821-1516, while the photo leaked early this week carried a part number of 821-1476. These iPad mini parts are the first interior components of the device to appear, and while they have not been confirmed to be for the device in question they are consistent with Apple parts and are too large to fit inside an iPhone.

Update: MacRumors has received more info from iResQ about the new dock connector port. The site tells us that "there is just one set of eight contacts inside of the port" with "none on the top side".

keysofanxiety
Tim Cook: "We're going to double down on secrecy."

GuitarDTO
"And here is the new iPhone!! We're so excited by this product".

NeverhadaPC
Am I the only one who is sick of seeing this small parts of various devices... JESUS! Whether it has 1 or 10 pins, I don't give a **** unless I am the engineer who has to interface these components into the product I will actually use.

urbanj
Nope this is all a ploy. Tim Cook said he was cracking down. Apple wouldn't do this. Steve wouldn't have done this. It's ugly and nobody will buy it. :rolleyes:
Score: 10 Votes (Like | Disagree)
Read All Comments