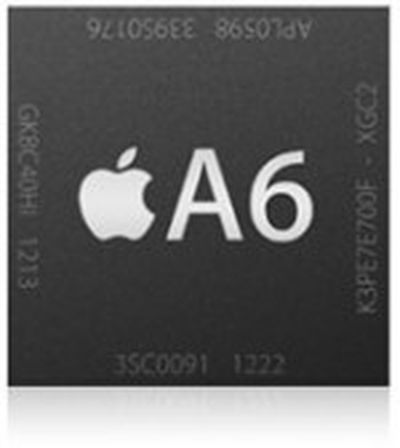 MacRumors has received word from a developer who has seen evidence of a previously unknown "iPad3,6" device showing up in his app analytics. Most interestingly, the device's processor targets the new ARMv7s architecture that supports the custom A6 system-on-a-chip found in the iPhone 5. This new iPad thus appears to be running either an A6 chip itself or a variation on Apple's custom A6 design.

It is unclear exactly what this new iPad device represents, as an "iPad3,6" designation would seem to imply a derivative of the current-generation iPad, which is designated "iPad3,1", "iPad3,2", and "iPad3,3" for the various Wi-Fi and cellular models. There have been rumors that Apple is planning to release a tweaked version of the third-generation iPad in the coming weeks in order to incorporate a Lightning connector and other internal changes, but it seems difficult to believe that such a release would also include an upgrade to the new A6 chip.

Alternatively, this new iPad3,6 could represent Apple's 2013 iPad model, which is expected to run some flavor of the A6 chip. We would, however, have expected that device to carry an "iPad4,x" designation.

This new iPad3,6 does not appear to represent the "iPad mini" reportedly scheduled for launch later this month, as that device is said to be a derivative of the iPad 2 running Apple's cheaper A5 chip and seems to have already been seen in logs carrying "iPad2,5" and "iPad2,6" designations. Our source who saw the iPad3,6 reference has also seen this iPad2,6 device running an A5 chip.

Lancer
Didn't we have a similar thing happen for the iMac but still no new iMac has been released!
Score: 20 Votes (Like | Disagree)

My 10" iPad 3 is still good enough for me. I don't really see much Apple can do with it besides a processor update.

So the one you got less than six months ago still does the job? Good to hear.
Score: 15 Votes (Like | Disagree)

OrangeSVTguy
My 10" iPad 3 is still good enough for me. I don't really see much Apple can do with it besides a processor update.
Score: 10 Votes (Like | Disagree)

Frankied22
If this event is actually happening this month it should be interesting.
Score: 5 Votes (Like | Disagree)

Monday January 24, 2022 7:12 am PST by Sami Fathi
Three months after their launch, the 14-inch and 16-inch MacBook Pros continue to experience high demand and seemingly short supply, with shipping dates for both models stretching into multiple weeks in several of Apple's key markets. In the United States, the baseline 14-inch MacBook Pro with the M1 Pro chip is estimated to ship in three to four weeks, promising an arrival by at least...
Read Full Article • 201 comments