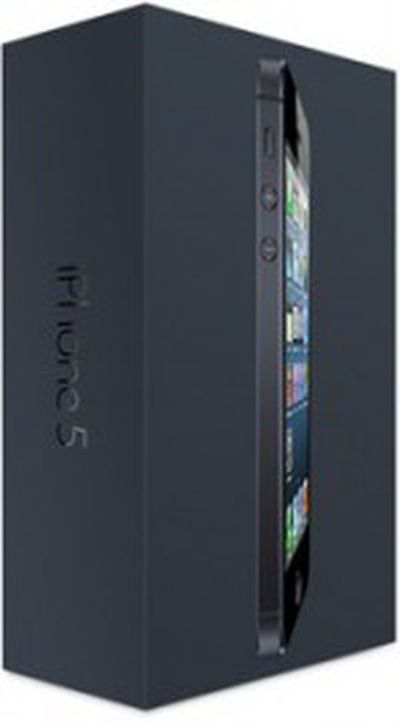 Topeka Capital Markets analyst Brian White has released a new report analyzing some launch-day iPhone 5 data based on a limited survey of 100 purchasers at Apple retail stores in New York City. According to White's data, half of surveyed iPhone 5 were upgrading from the iPhone 4S, which itself was released only 11 months ago.

Among non-iPhone users moving to the iPhone 5, White found that Nokia and HTC were the most popular phone brands being abandoned for the iPhone 5. White also surveyed customers on their iPhone 5 color preferences, finding that 56% of surveyed buyers were opting for the "Black and Slate" models over "White and Silver" models.

In a separate report, Piper Jaffray analyst Gene Munster discusses his team's visits to Apple's Fifth Avenue and Upper West Side retail stores in New York City and the Uptown store in Minneapolis, where they found that lines were on average 83% longer for the iPhone 5 than they were for the iPhone 4S. Munster also had representatives counting customers at the Chestnut Hill and Bolyston Street stores in the Boston area, but with no prior-year data available for those locations, they primarily serve as a baseline for future analysis.

Many third-party retailers are experiencing very low stock of the iPhone 5, resulting in delays in availability even for customers who pre-ordered the device. Availability at Apple's own retail stores appears to be remaining fairly high, although some locations are very low on or completely out of select models. Carrier availability has also generally been fairly good in stores, although Sprint is now running out of stock at its East Coast stores.

Update 11:45 AM: Munster has now released his own results on iPhone 5 customer profiles, painting a very different picture than that seen by White. Munster's survey of 517 iPhone 5 buyers found just 26% of them upgrading from the iPhone 4S, compared to 50% in White's survey. Munster's survey found that 45% of customers were upgrading from the iPhone 4, while White pegged that number at just 11%. Finally, while White's data showed 36% of customers were moving from a non-iPhone, Munster's data put the number closer to 17%, with the vast discrepancies across the board illustrating the unreliability of such surveys.

kiantech
I still find this data nonsense. The people who wait in line are a different breed then people who prefer to have the phone delivered to them.
Score: 14 Votes (Like | Disagree)

I still find this data nonsense. The people who wait in line are a different breed then people who prefer to have the phone delivered to them.

This. While these stats don't claim to be "scientific," they're so far from meaningful that it's a bit ridiculous that they're being thrown around.

"From early adopters who like to wait in long lines in New York City, inconclusive and incomplete information has been gleaned after one man conducts informal poll of 0.01% of all NY buyers - who themselves represent less than 0.01% of the market."
Score: 8 Votes (Like | Disagree)

I stopped reading after this...:rolleyes:
Score: 6 Votes (Like | Disagree)

My 4S is slick and smooth on iOS 6. I'm having trouble seeing what the big push from 4S to 5 is for.
Score: 6 Votes (Like | Disagree)
Read All Comments