Wednesday September 19, 2012 2:14 pm PDT by Eric Slivka
M.I.C. gadget points to a report from the ePrice forums indicating that grey market vendors in Hong Kong have already managed to obtain limited stocks of the iPhone 5 and have begun selling them starting at the equivalent of about $1100. Apple's retail price will start at roughly $720 when sales officially begin on Friday.

The report names the seller as "Mr. Lo", who has a history of selling Apple products prior to their official launches at significant markups.

When Lo was asked about the sales of the iPhone 5, whether there would be a demand for it, he said the stock for the iPhone 5 is quite tight, so he thinks it will be alright to re-sell the phone for a hefty markup, at least for the first two weeks. What’s more, he has prepared “secret” couriers in U.S. and Europe to hop on planes to Hong Kong after securing about hundreds of iPhone 5s. Right now Lo has already received 100-200 orders from mainland China customers before the iPhone 5 goes on sale in Hong Kong’s Apple retail store. 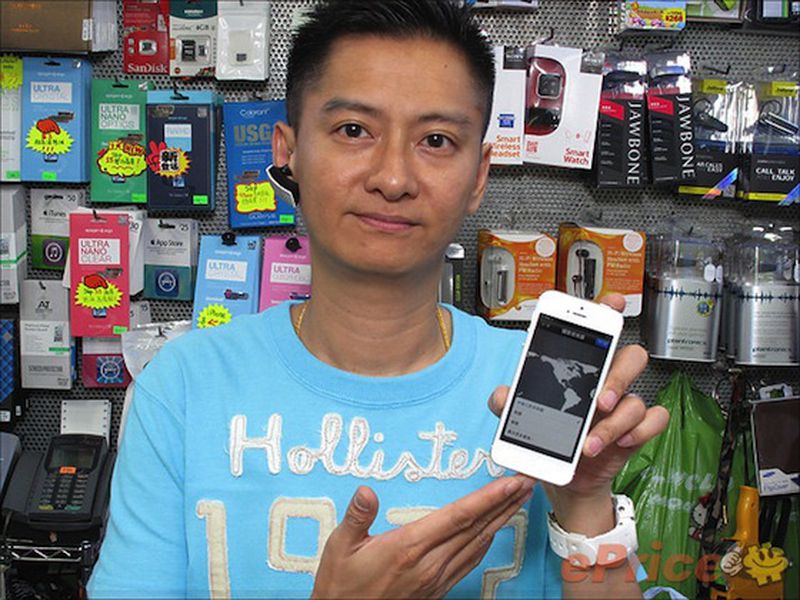 Lo is also said to have a standing offer to purchase sealed iPhone 5 units from customers at a premium of roughly $200 over their purchase price, as he expects to continue selling the devices at even higher prices due to tight initial supplies.

Hong Kong has been a popular point of entry for grey market iPhones headed to China, where the devices have launched at much later dates than in other countries around the world. These Chinese and Hong Kong grey markets are also fueled by purchases in the United States and other countries that are shipped back to meet demand in Asia, although Apple has instituted purchase limits and delays in launching unlocked versions in the United States in order to help combat this issue.

Hong Kong is part of the first round of launches for the iPhone 5 on Friday, but Apple is not taking online pre-orders at the moment and is advising customer that in-store sales will begin at the standard 8:00 am launch time on Friday.

timshundo
His shirt cracks me up
Rating: 32 Votes

sevimli
Who sells the iphones to him in the first place? Apple should able to track it down with the serial numbers easily... I hate these kind of people, dont tell me free-market bs please.
Rating: 21 Votes

aohus
what's sad is that his T-shirt is an imitation too.

i see so many copycat hollister/abercrombie shirts in east asia.

and those brands were 'trendy' 6+ years ago!
Rating: 20 Votes

naeS1Sean
What the hell is a grey market? I thought they were black...
Rating: 17 Votes

You didn't hear?...they changed the name to grey. If they called it black, that would be considered racist...


I'm grey, and I consider this racist.
Rating: 13 Votes

wkadamsjr
His name is "Mr. Lo"? Any chance the first name is "Hung"?
Rating: 13 Votes

GeekLawyer
That gentleman is appropriately nick-named.

"A grey market or gray market, also known as parallel market, is the trade of a commodity through distribution channels which, while legal, are unofficial, unauthorized, or unintended by the original manufacturer." -Wikipedia


Yeah...so since these aren't legally available for sale anywhere right now, these are black market, stolen phones. Probably out the back door of Foxconn.

What the hell is a grey market? I thought they were black...


You didn't hear?...they changed the name to grey. If they called it black, that would be considered racist...
Rating: 10 Votes

Schmitty11
I'm more of a Black Market guy myself. Sometimes the Blue Market will have good buy
Rating: 10 Votes