The results show an iPhone5,2 device running iOS 6 with a Dual-Core 1.02GHz ARMv7 processor and 1GB of RAM. 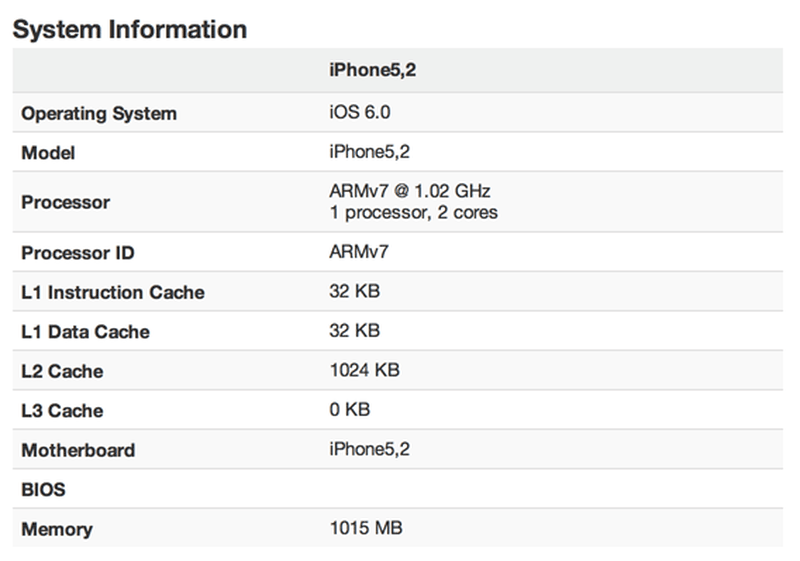 The A6 also appears to be clocked higher than the A5 at 1GHz (the iPhone 4S A5 ran at 800Mhz). The 1GB of RAM was previously confirmed by part number markings on the A6 processor itself.

Poole acknowledges that any pre-release results on Geekbench have a chance of being faked, but he seems to believe that these results are legitimate. The iPhone 5 will be available to the general public on September 21st.

This is all less about specs and more about engineering.
Rating: 82 Votes

Hakone
All that performance from a thinner/lighter package; a testament to superb engineering and design.
Rating: 77 Votes

daneoni
In before Galaxy SIII users with their 1.4/1.5GHz blah blah blah...zzzzz

Oppressed
So wait a second. The iPhone 5 is the thinnest, lightest, and fastest smart phone on the market with the largest App store?

Srsly guys this phone was a disappointment like everyone said it was.
Rating: 50 Votes

pgiguere1
Damn, the iPhone 5 will officially be the fastest smartphone out there.

And that's just theoretical performance. In practice the resource-efficiency of iOS will make this phone even more of a beast.