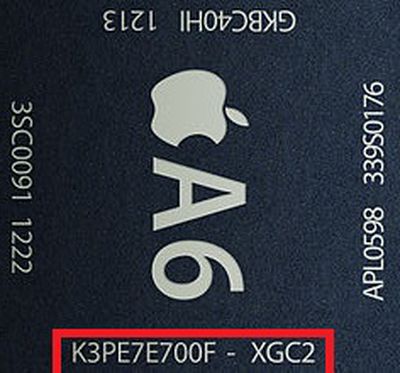 Apple announced the iPhone 5 on Wednesday. The new iPhone contains several improvements including the use of a new A6 processor from Apple. While it's been widely speculated that Apple would boost the RAM in the new iPhone, we haven't seen much in the way of confirmation.

The iPhone 4S and iPhone 4 both contain 512MB of RAM for developers to work with. Running out of RAM can cause some performance issues as existing applications or documents may have to be purged from memory from time to time.

iFans first posted confirmation that the iPhone 5 has 1GB of ram based on the part numbers listed on the A6 chip itself. After some investigation with Kyle Wiens from iFixit, we've been able to confirm their findings as well, using Samsung's own product guides.

The chart above comes from Samsung's 2012 Product Solutions Guide (PDF) which lists part numbers of various memory parts they have for sale. The iPhone 5's A6 part number lines up with the family of 8 Gigabit mobile DRAMs which translates into 1GB of RAM. The A5 part family is also listed and accurately shows 512MB of RAM (4 Gigabit).

Ah, half the memory of the S3


Yeah, half the memory and double the performance. I'm sorry, the S3 is NOT a great device. It's clumsy, cheap plastic, loaded with bloat, and isnt as smooth as people claim it is. I sat down with it for a while and was nervous that it might make me second guess getting the iPhone 5. Well, im happy to say it had exactly the opposite effect. It's got a lot of bells and whistles, most of them useless in real world use (although it did have a few cool things), and that's about it. IMO iPhone blows it away. And the build quality doesn't even compare a little bit. Keep ur S3. And I'll gladly keep my iPhone.
Score: 37 Votes (Like | Disagree)

phantomsd
WHAT??? ONLY 1GB??? I'M CANCELING MY ORDER!!! APPLE HAS STOPPED INNOVATING!!! HOW HARD IS IT TO PUT ANOTHER GB IN THERE??? :confused:

Caliber26
Samsung's hateful ad already confirmed this for a lot of us. ;)
Score: 18 Votes (Like | Disagree)

Zunjine
I love the silliness of some posters:

The iPhone 5 is only the iPhone 4S with a bigger screen and better specs...

What did people expect?! What did they want?! I mean, for all the griping didn't Apple just launch an absolutely state of the art smartphone? Doesn't it carry the very latest tech in LTE chips, ARM processors, manufacturing techniques, touch screen technology, image processing? Isn't likely the fastest smartphones going while still being among the thinnest and lightest handsets on the market?

There are, as far as I can see, only two things NOT included in this new iPhone which anyone could reasonably complain about: wireless charging and NFC. The first is a gimmick - it's slow, inconvenient, expensive and adds little to no value over and above standard charging methods. NFC is a more complex question - there are clearly potential uses for NFC but none are yet compelling to me and Apple made a judgement call about the design compromises they would have to make in order to incorporate NFC and decided it wasn't worth it. That's a legitimate decision although clearly others think differently. Of course, both NFC and wireless charging can easily be added through the use of a third party case - so those options remain for people who really desire that functionality.

I see the new iPhone is a fantastic achievement. The 4S remains one of the best phones on the market in terms of technical specifications and, for me, the best phone going for overall design, ease of use, ecosystem etc. I still look at my 4S, which has a design that's over two years old, and find it to be a thing of beauty - classically stylish and made of exceptionally high quality materials. Obviously this is a matter of taste but I'd wager good money that, in a few decades' time, the 4/4S will be the subject of study for industrial design students all over the world while few other smartphones will warrant any consideration. Nokia's Lumia range is lovely in many ways but it might date more quickly because of its more pop-like sensibilities. The Galaxy range from Samsung won't last the test of time - they're nice to look at but lack substance visually. I picked up a Sony Experia handset yesterday and was surprised by how cheap and tacky it felt. I know there are some nicely built handsets out there, don't get me wrong, but I genuinely haven't seen one that comes close to the 4/4S, and that's after more than two years!

The iPhone 5 is, by all accounts, a very nice feeling handset - I can't comment directly until I've held one in my hand. Only time will tell if it becomes a design classic like the 4/4S but all the signs are good so far.

They've stuck closely to the design philosophy of the prior generation and created a handset which goes even further in terms of minimalism - peeling away the facade to reveal the industrial design, the function of the device. The unibody case is simpler than the glass and stainless steel of the prior generation. The slate/black and silver/white combinations are even more stylistically pure as the metal and the glass are matched more closely for the cleanest fit (the white one looks stunning but I intend to stick with black as it's less showy). The brushed, matt finish of the flat faces compared to the high shine of the chamfers creates a striking but subtle impact - a tiny detail that turns a potentially homogenous, even boring shape into something really eye catching (as always, it's the little things that count). All the busyness is now concentrated on the bottom edge of the handset leaving an even cleaner finish around the other three edges but the tidy design of the smaller port and bold, circular speaker holes stop things feeling cluttered.

The iPhone 5 is a phone built for people who love great design. Sure, I like a phone that goes like stink! I love high end technology as much as the next geek, but I also love great design. In fact, I love great design more. That's why I wouldn't buy a Samsung - they're nice but the niceness is immediate and fleeting - lemonade vs the aged single malt of truly great design. Instantly pleasing but just as instantly forgettable, pop vs classic rock. There's nothing wrong with that, of course, but it isn't appealing to me. If you want something like an iPhone you really only have one option: an iPhone.
Score: 16 Votes (Like | Disagree)

Dr McKay
Finally! Maybe now web pages will stop refreshing when you have more than a few tabs open
Score: 16 Votes (Like | Disagree)

edry.hilario
Who cares its selling like hot cakes. BRING ON THE IMAC NEWS NOW!
Score: 15 Votes (Like | Disagree)
Read All Comments