9to5Mac shares some details on Apple's apparent plans for updated iPods reportedly set to be introduced alongside the iPhone 5 at next Wednesday's media event. Based on the information that appears to come from part numbers in inventory systems, Apple will reportedly be making at least minor changes to three of the current iPod lines.

- iPod shuffle: Apple is said be making minor changes at the most to the entry-level music player, with the biggest change perhaps being the availability of eight different colors compared to the five color options on the current model. The current $49 pricing is likely to remain in effect, but it is unclear if the current 2 GB capacity will carry over to the new models.

- iPod nano: Cases for a larger, redesigned iPod nano have begun surfacing, and 9to5Mac's report indicates that a new code name for the device is indeed suggesting more than a minor refresh. The new iPod nano is also said to come in eight different colors, up from the current seven color options. Interestingly, the report indicates that Apple may streamline the iPod nano lineup by offering only a single storage capacity, compared to the current 8 GB and 16 GB options. The report says that pricing is likely to be similar to the current high-end iPod nano price, but it incorrectly states that price as $169 when it is actually $149 after last year's price drop. 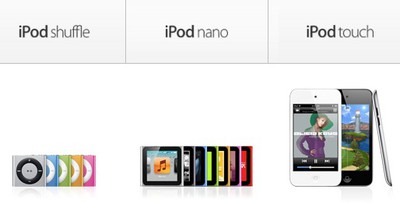 - iPod touch: Apple is also expected to update the iPod touch, with several rumors and part leaks pointing to the device gaining a similar 4-inch display to that apparently coming to the iPhone 5. But today's report indicates that Apple may take a hybrid approach to its lineup, releasing a tweaked version of the current design at the low-end while bringing the significant redesign to the higher-end models.

This new entry level configuration is said to be tweaked. We’re not sure what this tweak refers to, but we speculate that it has to do with a either (or a combination of) a smaller dock connector, new packaging/iOS 6 pre-installed, or a bump in the base storage capacity configuration.

We’ve also received information that points to new iPods at $299 and $399 price points. We believe these to be redesigned versions of the two top iPod touch models.

The report says that these new $299/$399 iPod models presumed to be the iPod touch will come in "multiple variations" beyond the capacity differences implied by the two different price points. The report speculates that these variations could be related to multiple color options, but it is unclear how many of these options there are for each model and Apple of course already offers the iPod touch in both black and white.

I do not understand how anyone could use 128GB. It is simply unreasonably large amount of storage space. It is incredibly hard to use 128GB worth of music (assuming one uses them for music and not storing hundreds of apps they don't open), I mean that is just WAY too many songs to choose from, like you would literally never listen to most of them. Generally you listen to certain groups of songs you like, and most of them you never end up playing, like I have so many songs on my 8GB iPod Touch that I literally never play because I just don't feel like listening to them. It's just for those people who want every song they own, no matter how many plays it has on their device (0 being the majority) just because.

bushido
with a price that high i wonder how they could justify an iPad Mini at a similiar price point hm
Score: 10 Votes (Like | Disagree)


I was actually wondering that myself. Something tells me the iPad Mini is the "new iPod Touch"...
Score: 8 Votes (Like | Disagree)

chrmjenkins
They've got to do something to make the touch attractive with a sub $300 iPad mini.
Score: 8 Votes (Like | Disagree)

If Apple thinks that a 4" iPod Touch can compete with the 7" Kindle Fire and Kindle FIRE HD offerings at the same price point, then they have lost touch. Say what you want about the Kindle Fire being plastic, etc. They have 1280x800 screens spread over 7" of real estate and 16 GB for $199. That is what the current 3.5" 8 GB iPod Touch costs. The original Kindle Fire didn't have great specs or great reviews, but these new ones look to be addressing that while maintaining crazy low prices.

Let's see you put that Kindle Fire in your pants or shirt pocket.;)
Score: 6 Votes (Like | Disagree)
Read All Comments

Friday June 18, 2021 9:41 am PDT by Sami Fathi
After a long wait, YouTube for iOS is officially gaining picture-in-picture support, allowing all users, non-premium and premium subscribers, to close the YouTube app and continue watching their video in a small pop-up window. In a statement to MacRumors, YouTube says that picture-in-picture is currently rolling out to all premium subscribers on iOS and that a larger rollout to all US iOS...
Read Full Article • 134 comments