Fortune reports on a new analyst report published by Pacific Crest's Andy Hargreaves. The report was written after a meeting on Wednesday with Apple's Peter Oppenheimer and Eddy Cue, Apple Senior Vice President for Internet services and software. 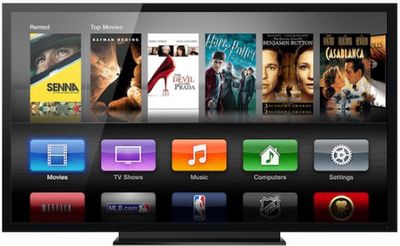 Hargreaves' interpretation of that meeting was that an Apple television would be "extremely unlikely" in the near term. Hargreaves writes:

Relative to the television market, Eddy Cue, Apple SVP of Internet Software and Services, reiterated the company's mantra that it will enter markets where it feels it can create great customer experiences and address key problems. The key problems in the television market are the poor quality of the user interface and the forced bundling of pay TV content, in our view. While Apple could almost certainly create a better user interface, Mr. Cue's commentary suggested that this would be an incomplete solution from Apple's perspective unless it could deliver content in a way that is different from the current multichannel pay TV model.

As pointed out by Fortune's Philip Elmer-DeWitt, SEC rules prohibit sharing insider information that might have material affect on the company's stock, so Hargreaves' interpretation is just that - his interpretation of Apple's comments about delivering a "great customer experience and addressing key problems."

Apple has been rumored to be entering the television market for some time. The most recent rumors, however, have suggested that Apple is still deep in negotiations for content for their television services.

abhishake
The UI is already taken care of with the Apple TV.. Why make a TV for that.
Score: 7 Votes (Like | Disagree)

d0vr
No surprises here. Siri certainly wouldn't be 'cracking' the answer to any major concerns I have with how I currently use televisions.
Score: 5 Votes (Like | Disagree)

I actually don't understand how/if the networks could lose $$ on a Cable-iTunes system. I know I would buy a share of Channels/shows. Wouldn't people like me surely help pick up profits? Its got to be the providers (TW/Comcast/etc.) holding the gun. "sign with them, and we're done"

It works like this: in a model where it's just the artists (those who create the content), Apple and us, someone has to make up the difference made in the model "as is". It's not just our individual subscription dollars. The model "as is" has lots of OPM (other people's money) flowing. In the artists-apple-us model, lots of that OPM flow is at risk. For example, commercials that run on all those channels "we never watch" yield revenues that doesn't come out of our pockets. A fair amount of that revenue flows to the artists that make the stuff we do watch. Kill off those channels we don't watch and we kill off that OPM money that helps pay for what we do watch. Then, either we or Apple would have to make up for that lost revenue when there's only us and Apple in the new model. Recognize that if it comes down to us or Apple coughing up the difference, only 1 of those two will actually be on the hook. Guess who. If we don't make up the difference, then the money evaporates that pays for the creation of the stuff we want to watch.

Similarly, Apple's replacement model generally depends on a broadband pipe owned by someone who is in the video subscription business too. They like their video subscription revenues "as is". But, if Apple is going to take that business from them, they'll be obligated to make up for those losses in some other way. What way? Raising the cost of broadband. Thus, even if we could save some money in the new model al-a-carte (setting aside the OPM subsidies that help pay for our entertainment now), the big communications companies through which Apple's replacement solution must flow will not just roll over and take the hit. Our broadband costs would simply rise... justified with phrases like "for heavier bandwidth users" (sound familiar?).

Too many are dreaming of al-a-carte with fuzzy math. It's not $100 for 200 channels = 50 cents a channel. I like 10 channels, so my bill should be cut to $5/month. You can't hit an industry with a 95% reduction in revenues and expect it to continue to crank out the same quality of output that is generates now. Al-a-carte actually implemented would be 200 channel bundles for $100/month or 10 channels al-a-carte for at least a $100/month. None of the players beyond us have any goals of minimizing our out-of-pocket. All of them share Apple's goal- to make as much money as they can. The artists and the middlemen want to make more money this year than last... and more next year than this year. There is no win in supporting any solution that thoroughly cuts their revenues by 90% or more... except for us dreamers who believe that can somehow work.

Too many others dream of al-a-carte (with the fuzzy math) and commercial-free. To make up for the OPM that flows through the existing model (without coming out of our pockets) it would cost each household about $54/month. If there's no commercials in the dream and no channels "I never watch" running commercials I'll never see, that OPM evaporates. In an artists-Apple-us replacement model, somebody- either Apple or us- needs to make up for that $54/month loss of revenue from those commercials not being purchased... OR the quality and volume of programming will significantly fall.

The full dream is us paying relatively nothing for anything we want commercial free... for Apple to pull this off so that Apple can get it's big cut of the profits (but where is that big cut of profits if we are paying next to nothing?)... and somehow this new model will still yield the money to pay the artists to make all of the shows and films- including gambling on brand new shows and films- that we watch. It's just a very naive dream.

For some big model replacement to come to pass means coming up with the (non-fuzzy) math that shows all involved how they are going to make more money than the current model. That math can't work with us paying 90% less in the dream.
Score: 4 Votes (Like | Disagree)

I understand that logic. Too often Apple has released products too soon, before they make them really special. I think a perfect apple TV is worth waiting for, especially considering its anticipated price. And honestly, I won't buy it for the interface alone. I have an AppleTV already for that. I want the content. Thats what will make it great and its worth the wait!


Wat? That's Apple's biggest draw. They didn't invent the smartphone but when they did release one, they did it right. Same for the MP3 player and the tablet. Much like Ford didn't invent the car nor did Google the search engine but they did it in a way that was better than everyone else at the time.
Score: 4 Votes (Like | Disagree)


Thats not a mockup, thats Apple's own image for the current AppleTV
Score: 4 Votes (Like | Disagree)

MacOSXAddict
No to an Apple Television but what about an Apple cable box?
Score: 4 Votes (Like | Disagree)
Read All Comments