Back in June, we pointed to a teaser site at FinallyOnTheMac.com hinting at a major music software title coming to the Mac for the first time. Our research and the general theme of a teaser video posted on the site suggested that Sony was behind the campaign and that the company's Sound Forge audio recording and editing tools were the product in question. 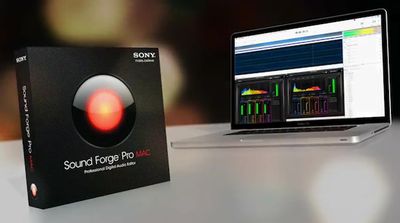 No details on pricing or a release date have yet been made available, but Sony will undoubtedly be sharing more information in the coming weeks with four additional teaser videos still to come.

How does this stand against LogicPro and other Pro apps by Apple?

519tbarr
This is not a DAW so it doesn't compare to Logic. It's an audio editor.
What we need is a completely revamped Acid Pro for the mac and 64x pc.
Score: 6 Votes (Like | Disagree)

People actually use SoundForge when Logic and Pro Tools exist?

They're different beasts. Pro Tools and Logic are multitrack DAWs, while Sound Forge is primarily for editing already existing sound files. While DAW software always has editing features built in, they're never as robust as what's offered in a dedicated editing application.

Personally, I have a need for destructive editing quite frequently, and the demise of Soundtrack Pro (which I still use) and Peak (to which I was planning on switching.. grumble..) has left a pretty big gap in that market.

Hopefully the Sound Forge port will be a good one. I wish that they released more technical info about it, though, rather than a video that shows off what a waveform looks like. :/
Score: 5 Votes (Like | Disagree)

bassjunky
Correct me if I'm wrong, but Logic is a multi-track DAW, where Sound Forge is for more two-channel editing. I've been using Sound Forge since the Sonic Foundry days and have typically found it to be one of the best stereo track editors out there.