Leaked Photos of the 'iPhone 5' Logic Board

French site Nowhereelse.fr points to two new photos originally posted to Chinese forum Weiphone. The photos appear to be the front and back of the next generation iPhone logic board which houses the processor and other support chips for the device. The board is distinct from both the Apple's iPhone 4S and iPhone 4 logic boards. 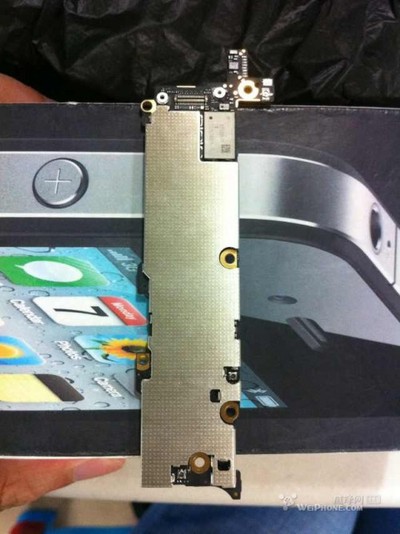 Nowhereelse notes that the screw holes of the logic board lines up exactly with those of the previously leaked shells The site even created this animated GIF which shows how the holes line up. The image appears to be mirrored, presumably for clarity.

We've seen a larger number of part leaks for the next generation iPhone, but this is not a new phenomenon. Last year, we saw many parts for what would become the iPhone 4S, including its logic board revealing an A5 processor. This leak is somewhat less revealing as much of the shielding remains in place.

The increased number of part leaks likely corresponds to the belief that Apple is already ramping up production of the next generation iPhone. Apple is expected to launch the new iPhone on September 12th.

And we're still calling it the iPhone 5 huh?


And the broken record says what?
Score: 66 Votes (Like | Disagree)

The frequency of "Leaks" has me thinking that a part of this must involve Apple. There's simply too many, and Apple is too powerful, especially over their suppliers to allow this to continue.

As I see it there are a few possibilities.

1) Apple is orchestrating the leaks "from suppliers".

2) The suppliers have tested the waters and found Apple "looking the other way".

3) Apple's long time advocates in the industry, or the writers like Walt Mossberg, David Pogue, et al, that were the anointed ones by Steve Jobs during the early days, then continuing till Steves passing, are the ones behind some of this.

#4. Apple is ramping up production of hundreds of thousands of iPhone 5s in preparation of the launch next month... some parts are going to slip out.

Yup. The people on this forum seem largely incapable of counting to 6 and realizing this is the 6TH GENERATION iPHONE

So I suppose everyone[including Apple] who called the iPhone 4S the.. Well.. iPhone 4S were wrong when it was clearly the iPhone 5?

Fresh1
Can we really trust the French?
Score: 28 Votes (Like | Disagree)

Tim Cook: Apple will 'double down' on product secrecy.


Tim Cook's quote was taken out of context. He was actually ordering a double down from KFC.

TheOrioles33
And we're still calling it the iPhone 5 huh?
Score: 26 Votes (Like | Disagree)
Read All Comments

Tuesday May 11, 2021 5:06 am PDT by Hartley Charlton
Apple's next MacBook Air will feature a completely new design and come in a range of colors like the 24-inch iMac, according to leaker Jon Prosser, who has now released supposedly accurate renders of the new machines based on leaked images. In a new video uploaded to YouTube channel Front Page Tech, Prosser elaborated on his previous prediction that Apple's next-generation MacBook Air models ...
Read Full Article • 62 comments

Tuesday May 11, 2021 11:56 am PDT by Joe Rossignol
Last month, Apple introduced a new iPad Pro with the same M1 chip found in the latest Macs, and early benchmark results indicate that the M1 iPad Pro is over 50% faster than the previous-generation iPad Pro. Based on five legitimate Geekbench 5 results (here's the fifth) for the fifth-generation 12.9-inch iPad Pro with the M1 chip, the device has average single-core and multi-core scores of...
Read Full Article • 210 comments