Reuters reports that Sharp president Takashi Okuda today made a rare public reference to an unreleased Apple device, acknowledging that his company will begin shipping displays for the next-generation iPhone this month.

Japan's Sharp Corp. said it will start shipping screens destined for a new Apple iPhone that is widely expected to be released in October ahead of the pre-Christmas shopping season.

"Shipments will start in August," Sharp's new president, Takashi Okuda, said at a press briefing in Tokyo on Thursday after the company released its latest quarterly earnings.

He declined to give a more specific date for shipments beyond this month.

The report also reiterates circulating rumors that the next iPhone will carry a larger 4-inch display that makes use of in-cell touch technology to reduce thickness. 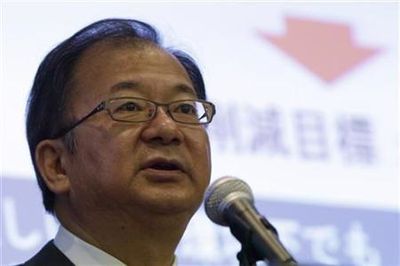 Sharp president Takashi Okuda
Numerous sources have all but confirmed that Apple's media event to introduce the next iPhone will take place on Wednesday, September 12, with several indicating that availability of the device will follow on Friday, September 21. Reuters' report mentions expectations for October availability, but that would mark an unusually long gap between introduction and availability given that Reuters was one of the sources to report the September 12 media event date earlier this week.
[ 108 comments ]

What better way to prevent sales of your competitors devices than to say "just wait a bit longer, our new devices are almost ready". Free marketing.
Score: 25 Votes (Like | Disagree)

tigres
Doubling Down on security and leaks eh Tim.
Your suppliers did not get the memo.
Score: 16 Votes (Like | Disagree)

Steve Jobs would not be happy with all of these leaks.

Didn't Tim Cook claim they are doubling down on secrecy.
Score: 15 Votes (Like | Disagree)

Yes, because Apple manages to have one of the best supply lines in the industry by letting emotions and their own paranoia decide business relationships. :rolleyes:
Score: 14 Votes (Like | Disagree)


Once Sharp makes a good product Apple will buy. Look at how long Apple has been purchasing from Samsung amidst all the legal wrangling and competition.
Score: 13 Votes (Like | Disagree)

Reason077
This is good news! Sharp's IGZO displays should be about 30-40% more energy efficient than existing iPhone retina displays.

IGZO TFTs are more transparent, so the backlight doesn't need to be as bright for the same effective brightness.

Along with a more efficient A5 CPU, this is all leading towards Apple make a thinner, lighter new iPhone which has the same or better battery life compared to the 4S.
Score: 13 Votes (Like | Disagree)
Read All Comments