In addition to today's iTunes Match expansion to Hungary and Poland, Apple has also undertaken a significant expansion of its iTunes in the Cloud feature, adding movies to the list of eligible items in the UK, Canada, Australia, and New Zealand. 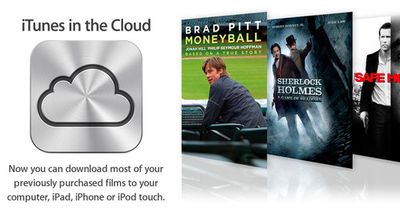 We've heard from several UK users who have reported that only a small fraction of their purchased movies are currently shown as eligible for re-download, through iTunes in the Cloud, but Apple indicates that "most" content should be included in the program.

The expansion marks the first time iTunes in the Cloud has been available for movies outside of the United States. The feature provides additional flexibility for those who have purchased movies through the iTunes Store, allowing them to download the content as needed on any computer, iOS device, or Apple TV.

iTunes in the Cloud for music and music videos is available in over 50 countries around the world, and support for TV shows has also been available in the United States, United Kingdom, Canada, and Australia. Re-downloads of apps and books are permitted throughout Apple's digital store markets.

Update: Steven Troughton-Smith notes that iTunes in the Cloud for movies is also live in Ireland.

Update 4: In Europe, the following countries are also seeing iTunes in the Cloud for movies: Czech Republic, Hungary, and Slovakia.

Ciclismo
I wonder what the hold up is getting this to Germany? Chances are those muppets at GEMA are blocking this because they want more money for the "artists" (i.e. the fat cars at the production companies).
Score: 8 Votes (Like | Disagree)

I hate to ask a stupid question, but I'm still new to Apple and the iCloud: How much iCloud space must some of you have, to have that many movies? Surely not the limited space that Apple gives?

I hate to ask a stupid question, but I'm still new to Apple and the iCloud: How much iCloud space must some of you have, to have that many movies? Surely not the limited space that Apple gives?


Anything you purchase from Apple has free storage in iCloud and doesn't affect your limits.
Score: 3 Votes (Like | Disagree)

The movies I have bought in Canada are from Warner and Paramount and they do not appear. When looking them up in iTunes, they all say "When purchased, this movie will not be available from iTunes in the Cloud".


every movie I've looked at all says this!! I think very few are in the cloud. I hate movie studios.
Score: 3 Votes (Like | Disagree)

ThunderSkunk
As long as netflix offers unlimited streaming movies & tv shows for $8.00 a month, I don't see the attraction of "buying" one movie at a time for half that, & storing huge files...

Rideherhard
none of my movies are showing up, ffs
Score: 3 Votes (Like | Disagree)
Read All Comments