Yesterday, Apple reversed course on their decision to remove their products from the EPEAT Environmental Registry. In a letter recognizing the move as a "mistake", Senior Vice President of Hardware Engineering Bob Mansfield reported that all eligible Apple products are now back on the registry.

The new Retina MacBook Pro was notably included in the "Gold" level status which represents the highest rating from EPEAT. 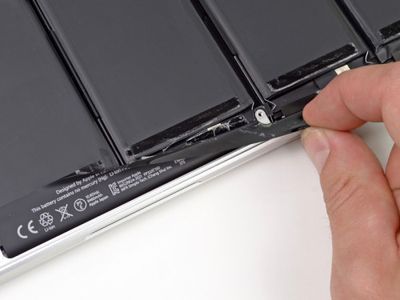 Retina MacBook Pro battery via iFixit
Fortune, however, cites the Electronics TakeBack Coalition's Barbara Kyle in a blog posting that expressed doubts that this rating will ultimately stick:

Kyle explains: "It's important to understand that the manufacturers grade themselves against the EPEAT criteria first, and then EPEAT conducts a review of this grading. That EPEAT review has not yet occurred. They can require the manufacturers to remove any product from the registry if it is not found to conform to the IEEE standard."

Kyle cites issues with required criteria for EPEAT's "Design for End of Life" which may prohibit the use of glue to attach the battery to the casing as has been seen on the Retina MacBook Pro.

A lack of EPEAT certification can have consequences as many government offices and corporations require certification for company purchases.

zorinlynx
I think this whole gluing the battery in thing is the worst idea Apple has ever had.

Batteries are consumable. They need to be replaced eventually. They contain toxic chemicals and need special handling for recycling.

Why did anyone at Apple think gluing the battery in was a good idea? It makes warranty service on the battery more expensive for the company. Surely a mounting screw does not occupy THAT MUCH space!

A glued-in battery is barely forgiveable on a $500 iPad. On a $2000 laptop with a much bigger battery? It's preposterous.
Score: 41 Votes (Like | Disagree)

cdmoore74
So much confusion. So much indecision.

And here we witness the chaos without Steve Jobs.
Score: 25 Votes (Like | Disagree)

Do you know a better way to make a device as small as humanly possible with zero wasted space?


Surely leaving the layer of glue out would help.
Score: 13 Votes (Like | Disagree)

So much confusion. So much indecision.

And here we witness the chaos without Steve Jobs.


Indeed... from everything I've seen over the past 3 months I fully expect Apple will see a rather dramatic decline in market domination going forward. And from that, direct evidence to the concept that Steve Jobs really was one of the greatest pioneers in the tech industry.

I think this whole gluing the battery in thing is the worst idea Apple has ever had.

Batteries are consumable. They need to be replaced eventually. They contain toxic chemicals and need special handling for recycling.

Why did anyone at Apple think gluing the battery in was a good idea? It makes warranty service on the battery more expensive for the company. Surely a mounting screw does not occupy THAT MUCH space!

A glued-in battery is barely forgiveable on a $500 iPad. On a $2000 laptop with a much bigger battery? It's preposterous.


Agreed, with their success has come arrogance. It's time for a correction. Several attempts met with failure will force a change in mentality at Cupertino.
Score: 13 Votes (Like | Disagree)

diddl14
In terms of recyclability I don't quit get the issue with glue?

Doesn't that make it easier to remove and recycle the battery?

The fact that the battery is not packed in some plastic casing also sounds like a big plus in term of less non-recyclable material used?
Score: 13 Votes (Like | Disagree)
Read All Comments