Behind the Deal for Apple's North Carolina Data Center

GigaOM takes a look at how Apple's data center in Maiden, North Carolina came to be, interviewing Catawba County Economic Development Corporation president Scott Millar for the story behind the deal. According to Millar, Apple was initially interested in building its data center within an abandoned textile mill in the area, but almost pulled out of the deal entirely when it decided that the building would be too small for its needs.

Economic development officials in Catawba County, and a data center development group, had been talking with Apple for months to get the company interested in setting up its data center in town. Then the developer spent months making sure that an abandoned mill building — a remnant of the region’s days as a vibrant textile manufacturing area — would be ready to house the new facility.

But as Apple executives got closer to making a decision, they suddenly decided that the building was just too small. It looked like Apple was going to have to go elsewhere for its massive 500,000 square-foot iCloud data center.

Ultimately, Catawba County officials were able to save the deal by offering Apple the 180-acre parcel that had initially been envisioned as a cluster of smaller data centers and which is now where the company's massive data center sits. 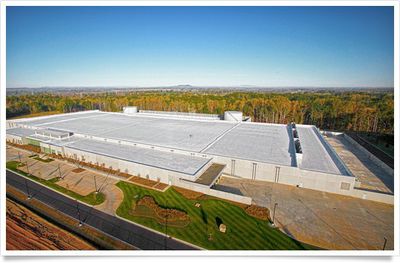 The report notes that Catawba County entered the data center market in 2005 when Google was searching for a location in the area, although the search giant ultimately settled on a site in neighboring Caldwell County. But based on that experience with Google and the groundwork that had been laid in working with power company Duke Energy on data center needs, Catawba County continued to scout for other companies interested in East Coast data center locations.

Apple was introduced to the Maiden site, which had almost been sold off a year earlier, through an existing relationship with T5 Partners, a data center development group that visited the area as part of annual site tour of the region to promote data center development. With the county moving rapidly to secure the needed site, power capacity, and economic incentives, it was able to strike a deal with Apple for what is currently the company's largest data center by far.

Apple has since announced plans for another large data center in Prineville, Oregon, where it has reportedly already begun building small-scale data facilities in modular buildings. And just weeks ago, Apple confirmed its intent to build yet another data center outside of Reno, Nevada, with the deal also including new facilities in Reno to support "business and purchasing" needs.

Why aren't they using that massive rooftop to put their solar panels? Seems like a waste of space. Why clear another whole strip of land to do it?

The additional roof load wouldn't have been calculated in the initial structure, and thus it wouldn't be safe to put it up.

Furthermore, whether it would have been cheaper initially to build the roof in such a way as to be a solar farm, or buy extra land is not as cut and dry as you would think.

Every successive beefing up of the roof adds to the building cost disproportionately, and you still have to deal with the fact that your workers and maintenance guys are all on the roof, every fastener needs to be water tight, you need to be so careful of the membrane, etc etc etc.

Even if they did plan on the solar right from the start, there is a good chance, depending on land value, that it would still be more economical to do the solar install at another site.

Besides, the less 3rd party workers in and around their data centers, the better they feel. Physical security will be immensely important to them.

I see what looks like 2 people walking in the middle of the roof.
Massive building!

I see what looks like 2 people walking in the middle of the roof.
Massive building!


To me it looks like one person and a mannequin. Hard to say, though.
Score: 6 Votes (Like | Disagree)

It's not really that big. Look at the parking spots in front of the building for scale.

Duhhh. What are you talking about? Did you not read the article or look at the pictures properly? It is 500,000. Did you not notice the loading docks on the right.

I miss my down vote button.

Why aren't they using that massive rooftop to put their solar panels? Seems like a waste of space. Why clear another whole strip of land to do it?


THe reason is because Apple employs professionals in everything they do.. and you are just a armchair president with employee of 1 (you) living in the basement of your mother's house and giving us your 'sound' advice.

That's your rebuttal? He gave you 3 distinct lead in reason plus I told you Apple is NOT a utility company which REQUIRES them to generate electricity and it is not their core product or service competency and you reply with REGARDLESS there is a lot of service area on the roof!? Okkkkk! YOU NAILED IT. One look from you just solved APPLE' major FLAW in their data center.

Methinks Mr O Rocks has been grounded by his mummy for looking at naughty websites so he's venting his pent up teenage angst here!

The question "why didn't Apple put solar panels on the roof?" is valid and my guess at an answer, along with the concerns raised about roof load etc... is that 500,000 sq ft is just too small to be of any real use as a solar array. The reasoning behind my assertion is that Apple are in the process of clearing 7.5 million square feet of land to build a solar farm on the other side of the street.

With regards to Mr O Rocks protestations about Apple not being a utility company, he seems to be forgetting that the plans for their new headquarters do include a small powerstation (fuel cell farm) similar to the one that's planned for the NC data center. To that end it would seem that Apple are investing some significant capital into power generation so one could argue that they are in fact something of a small utility company.

Now hopefully Mr Rocks will have his milk and cookies and calm down a little bit!?!?!
Score: 5 Votes (Like | Disagree)

To me it looks like one person and a mannequin. Hard to say, though.