KTVZ.com has received confirmation from Apple that the company plans to build a new data center on a 160-acre lot in Prineville, Oregon. The land was reportedly purchased for $5.6 million from Crook County. A February 15th filing first identified Apple, Inc. as the purchaser of the land, which Apple later confirmed:

Apple spokeswoman Kristin Huguet confirmed Tuesday that “we purchased the land and it’s for a data center,” but could not speak to details beyond that, other than to say it will be a "green" facility. 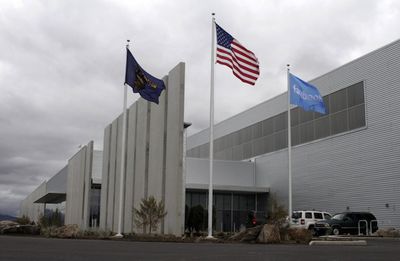 Facebook's data center in Prineville, Oregon
Word of the possibility of a new Apple data center in Oregon was first reported in December when it was revealed that Apple was in discussions over the location. The new data center would be near a recently opened Facebook data center in the same area.

Apple has been working hard to expand its data center capacity to handle iCloud and other services, having invested $1 billion in the North Carolina center and revealing a master plan that could see the size of that facility double in the future. Apple also maintains a smaller data center in Newark, California and has been building out minor additional capacity in Santa Clara, California near its corporate headquarters in Cupertino.

Apple has big plans for the cloud. I wouldn't be surprised if expanded cloud services has something to do with an upcoming Apple TV.

That, and Apple might be going into search and maps to get away from using google products on iOS.
Score: 9 Votes (Like | Disagree)

Patriot24
"Bring back jobs to America! Stop outsourcing! Build things here! Vote for me and I'll make it come true!"

The data center in NC employs less than 100 people. Data centers aren't the huge employers people think they are.


Construction workers to build it.
Landscapers to maintain the grounds.
Service/Maintenance jobs.
Utilities income.
Taxes paid to the State/County/City.
Other companies may be attracted to the area (Facebook recommended it to Apple).
On and on...

You can't measure the economic impact on the number of jobs alone.
Score: 8 Votes (Like | Disagree)

That, and Apple might be going into search and maps to get away from using google products on iOS.

Agreed. That part of the state really could use it.


A very happy side effect of Apple's success.

For me, it makes it easier to pay Apple's prices knowing that things like this are a result - however indirect it might be.:D
Score: 6 Votes (Like | Disagree)

pancakedrawer
I hope there is enough space there to store my TV shows and movies.
It's the missing link to removing my need for large hard drives all together.
Score: 6 Votes (Like | Disagree)
Read All Comments

Sunday May 22, 2022 1:57 am PDT by Sami Fathi
Apple has silently increased the price of its Apple Music subscription for college students in several countries, with the company emailing students informing them their subscription would be slightly increasing in price moving forward. The price change is not widespread and, based on MacRumors' findings, will impact Apple Music student subscribers in but not limited to Australia, the...
Read Full Article • 177 comments