Microsoft today unveiled a major tablet initiative to compete with Apple's iPad, Google's Android, and its own PC hardware partners. 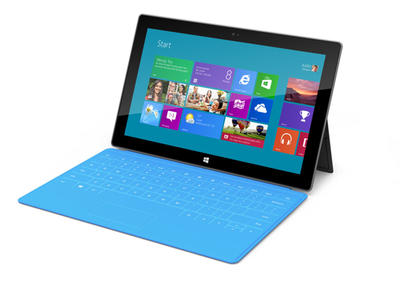 The Microsoft Surface is a 10.6" tablet powered by Windows 8, coming in two distinct versions -- both equipped with touch screens. One will be powered by an ARM processor and will be more like a traditional tablet running Windows RT. The other will be powered by Intel's 22nm Ivy Bridge chips running the desktop version of Windows 8.

As reported by The Verge:

The Windows RT version is just 9.3mm thin, weighs 1.5lbs, includes a built-in kickstand and is the first PC with a vapor-deposited (PVD) magnesium case, according to Microsoft. It will ship in 32GB or 64GB versions.

Microsoft's Intel-based Surface tablet will run Windows 8 Pro, with a thickness of 13.5mm, a weight of 1.9lb, and USB 3.0 support. This particular version will also include magnesium casing and a built-in kickstand, but will ship with either 64GB or 128GB storage. The Intel version will include additional digital ink support through a pen that magnetizes to the body of the tablet.


In addition to the tablet itself, Microsoft will sell two Smart Cover-like devices that attach magnetically to the Surface. Unlike Apple's add-on, which serves only as screen protection and as a stand, Microsoft's Touch Cover and Type Cover turn into a full-sized keyboard complete with a built-in trackpad. Microsoft says using the Touch Cover is "twice as efficient as typing on glass", a clear shot at the iPad's on-screen keyboard.

Microsoft did not share any information on pricing or availability, saying both the ARM and Intel editions would be price competitive with like products.

Reaktor5
I applaud Microsoft for doing something Google should have done with Android in releasing their own tablet. You can't hate on Microsoft for trying, competition is always a good thing.
Score: 195 Votes (Like | Disagree)

BrownManUPS
I'm really rooting for this to be great, just so Apple can get a fire under their belly to do that much better, once again. Competition is what makes innovation happen.
Score: 154 Votes (Like | Disagree)

Aidoneus
That's what the iPad is missing. Vents and cooling fans.
Score: 144 Votes (Like | Disagree)

DiSTURBED-oNE
Props to Microsoft for designing something different instead of just copying, unlike other manufactures. ;)
Score: 125 Votes (Like | Disagree)

goobot
It took more than 2 years, but the iPad actually has some decent competition finally.
Score: 113 Votes (Like | Disagree)

sbrhwkp3
I love the keyboard! Will need it for CTRL-ALT-Delete! :D
Score: 97 Votes (Like | Disagree)
Read All Comments

Monday July 26, 2021 11:35 am PDT by Juli Clover
Apple today updated its Apple at Work website with a new section dedicated to the Mac, which offers up 11 reasons why "Mac means business." On the webpage, Apple highlights the M1 chip as the number one reason why business users should choose a Mac, offering up an M1 overview [PDF] that explains the benefits of the M1 chip. The information isn't new, but it does provide a look at all of...
Read Full Article • 91 comments