Aaron Sorkin's Full Interview at D10: How to Write the Story of Steve Jobs' Life 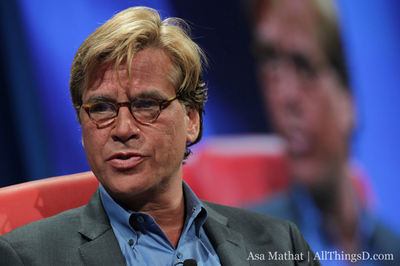 Prepare yourself for another piece with several real-life people "condensed" into a single character, date-night love stories added that never existed, and major facts wildly different from how they actually happened because "poetic license" makes it OK.

You just described every biographical movie & tv show ever made. If you want to watch an accurate portrayal of someone's life your best bet is a documentary.

You just described every biographical movie & tv show ever made. If you want to watch an accurate portrayal of someone's life your best bet is a documentary.

Exactly. It's meant to be entertaining and put a lot of butts in seats.

Just enjoy it and don't take anything too seriously.
Score: 3 Votes (Like | Disagree)

BlueParadox
Please not Noah Wyle. Sorry to the above posters, but I just don't think Wyle has enough intensity for the role. Besides, he's already done it.

Actors I could imagine pulling off the difficult task of playing Jobs are:

All great actors, all possessing a complexity similar to Jobs, all with their own fire-burning-inside intensity. :apple:
Score: 3 Votes (Like | Disagree)

Rocketman
My favorite TV writer. When I heard he was writing the Steve Jobs movie I knew it would be far better than Biography 2.0.

Although I am looking forward to the "circus" version with Kutcher. Note the reference to the D10 interview term. :)

Dx interviews could be improved with 70% less host talk (run on sentences) and 70% more guest interviews.

adildacoolset
I dont freakin care about who the hell plays as steve jobs, as long as he looks alike and acts well
Score: 2 Votes (Like | Disagree)


No dis on Noah Wyle, but I'd rather see someone of a higher calibre than someone who stars in second rate television dramas. I want a film actor who really knows his stuff.

Just because you saw Noah Wyle in some made for tv movie does not mean that he is necessarily right for the role.
Score: 1 Votes (Like | Disagree)
Read All Comments