With a number of media outlets having received Retina MacBook Pro review units on Monday after the Worldwide Developers Conference keynote and a few early hands-on reports having been published, more extensive reviews are now beginning to appear. To help summarize the overall response to the new machine, we've put together this roundup of some of the major reviews, along with some highlights from each of them. 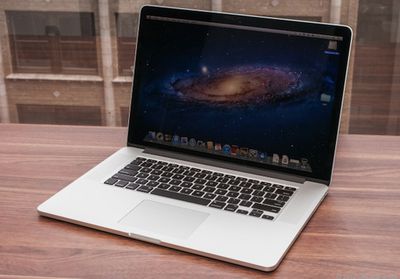 If you could design your dream laptop, how would you describe it?

And, of course, inexpensive.

The new Apple laptop that went on sale Monday hits an impressive number of those high notes in one radical swoop. As you might guess, the one it misses by the biggest margin is “inexpensive.”

Is this the best Mac ever? You can't ignore the Air as an amazing piece of machinery, especially with the new, higher-powered Ivy Bridge processors and faster SSDs tucked inside its wedge profile. But, this new Pro is on another level of performance. With a quad-core processor and up to 16GB of RAM it's a proper beast -- a proper beast that you can throw in your messenger bag and carry around all day without spending all night complaining about an aching back.

That said, this is not exactly a small machine, heavy enough that those happy Air users who've been feeling tempted might want to take a swing by their closest Apple Store and lift one themselves. It's expensive, too.

If you’re in the market for a premium OS X laptop right now, it’s hard not to recommend the new MacBook Pro with Retina display. If, however, power isn’t your ultimate goal, may we suggest shaving a few pounds and specs for the MacBook Air. As for everything in between, those non-Retina “standard” MacBook Pros, well... the writing’s on the wall. And of course, it doesn’t hurt to be even a little bit patient and wait for more apps to push Retina-optimized updates — if you get the MacBook Pro with Retina display now, you’ll be waiting on the world to change.

Even for those of us who are unlikely to spend more than two grand on a computer, or who prefer something more ultraportable than a 15″ model, the arrival of the Retina MacBook Pro is a meaningful moment in Mac history. It’s the most refined, advanced PC that Apple has produced to date. And it’s a safe bet that the ideas it exhibits will be reflected in future models from the company, including ones with smaller screens and smaller price tags. It’s both a great computer, and a preview of great computers to come.

I've previously called the 15-inch MacBook Pro one of the most universally useful all-around laptops you can buy. This new version adds to that with HDMI, faster ports, and more portability. But it also subtracts from that with its exclusion of an optical drive and Ethernet port, plus its very high starting price. The Pro and Retina Pro are clearly two laptops designed for two different users, and with the exception of all-day commuters who need something closer to a MacBook Air or ultrabook, one of the two branches of the MacBook Pro family tree is still probably the most universally useful laptop you can buy.

If you've come here to talk about the "inexpensive" quote please read the sentence that follows.
Score: 56 Votes (Like | Disagree)


Clearly, because the very next line read:
"the one it misses by the biggest margin is inexpensive."

It's clearer in the article what Pogue is getting at. The area where the Retina MBP misses the mark of a "perfect laptop" is in the pricing.
Score: 31 Votes (Like | Disagree)


As you might guess, the one it misses by the biggest margin is "inexpensive."

Read the entire article before you complain.
Score: 21 Votes (Like | Disagree)

is a deal breaker for me...stunning display but no thanks :(
Score: 15 Votes (Like | Disagree)


The review wasn't saying that the Macbook Pro is inexpensive, it was saying that being inexpensive is a desirable trait, one that this machine misses by a wide margin. Read more carefully?
Score: 15 Votes (Like | Disagree)
Read All Comments

Thursday September 29, 2022 12:38 pm PDT by Juli Clover
Tony Blevins, Apple's vice president of procurement, is set to depart the company after he made a crude comment about his profession in a recent TikTok video, reports Bloomberg. Blevins was in a video by TikTok creator Daniel Mac, who was doing a series on the jobs of people he spotted with expensive cars. After seeing Blevins in an expensive Mercedes-Benz SLR McLaren, Mac asked Blevins what ...
Read Full Article • 720 comments