Among the many software updates Apple has been pushing out associated with yesterday's keynote announcements, Thunderbolt Software Update 1.2 is a relatively minor 537 KB download offered to provide support for the company's new Thunderbolt to Gigabit Ethernet Adapter. The adapter is intended for use with Thunderbolt-equipped MacBook Air models and the new Retina MacBook Pro, which do not come with an Ethernet port built in due to their thin designs. 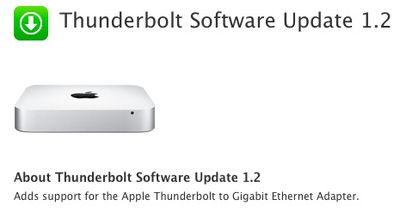 But as noted by TidBITS, the update seems to be causing major problems for a number of users, with some users' machines being rendered unable to boot.

Although it’s unclear if all Thunderbolt-equipped Macs are affected, a number of people have reported that installing the update causes a variety of strange boot-related problems (kernel panics, getting stuck at the gray boot screen, “Unexpected error” messages, and more). Regardless of the details, in each case, it seems that the Mac is rendered unusable, even thunderstruck. I’ve now heard from some people for whom the update did not cause any problems, but it’s still unclear what the difference may be between those who are and are not suffering boot failures.

The report notes that the issues can be fixed by reinstalling OS X Lion, although that is certainly not a desirable step for most users to have to take. Consequently, it seems advisable for users to avoid installing this update until the cause of the issues can be identified and Apple can introduce a revised version of the software.

Thank You Macrumors.com for this timely warning.
It's good to know you are watching out for us.
Score: 14 Votes (Like | Disagree)


Lose a port, gain a crash. Seems like a fair swap to me.
Score: 9 Votes (Like | Disagree)

For all I love about the Mac, the OS, compared to Windows, really seems like amateur hour way too often. If you disagree, make sure you're not mentally stuck in 95 and XP land.

In my XP years I certainly had my fair share of blue screens. However, in the two years I've been using Windows 7, with the same workflow as before (programming and graphics production), I had one crash, and that was because I accidentally knocked a PCIE card out of its slot. In the year I've been using OS X I've had to restart the Finder countless times, had Time Machine corruption on several occasions, and have to deal with "lazy" updating of the filesystem's "visual" state.

There are certainly things I like more about OS X, and that's why I'm still using it, but it really is a technically less sophisticated and more chaotic environment than Windows. Being technically less advanced isn't a negative, rather I can't get over that updates screw things up so often, especially given that Apple has way more control over the environment than MS does. Updates in Windows 7, which were much more frequent than for OS X, *never* disrupted the OS, and never even my most obscure 3rd party software utilities and apps.

I continue to use OS X because overall I like the feel of it more, and of course for the Apple ecosystem, but I do so with a constant background tension of whether or not it will remain stable.
Score: 6 Votes (Like | Disagree)

bring back plug and pray ;) :D


I think I'll pass updating my 2011 MBA at the moment.
Score: 5 Votes (Like | Disagree)
Read All Comments