9to5Mac reports that it has obtained details on the configurations of the Mac Pro and MacBook Pro to be released later today, with specifics on a number of accessories also appearing. The list is not complete, however, as it does not include details on the thinner Retina-display notebook, which is believed to be coming as a third member of the MacBook family, or the MacBook Air. 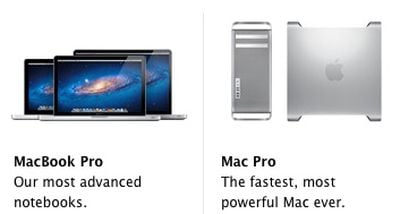 As previously noted, the Mac Pro is set to arrive in three separate stock configurations: two standard and one server. There have long been rumors of a case redesign, but so far only specs of the base models are known.

Oddly, the ATI Radeon HD 5770 is the stock graphics card included on the current, nearly two-year old Mac Pro. Apple would be expected to use a much newer graphics card option in its revised machines.

On the MacBook Pro side, the report points to four stock models, two each in 13.3-inch and 15.4-inch sizes. These machines are thought to be upgraded versions of the existing design, lacking a Retina display. Photos of what is claimed to be the graphics hardware on the logic board of the 15-inch MacBook Pro appeared just a short time ago, showing an NVIDIA GeForce GT 650M graphics chip with 1 GB GDDR5 graphics memory.

The report notes that the thinner "MacBook Pro" models with a Retina display are still expected to be introduced, with an analyst report from a few days ago having specifically claimed that they would be arriving alongside the existing MacBook Pro form factor for the time being. Details on the new Retina-capable notebook do, however, remain unknown. The MacBook Air is also expected to be gaining an update later today, and details on those models are not yet available either.

Apple will also be releasing a number of new accessories today, and the report indicates that these will include an updated AirPort Express, new USB SuperDrive, and a Thunderbolt-to-Ethernet adapter. Apple may also be revising its MagSafe power connection standard, with new accessories related to that change making an appearance.

Update: As several readers have noted, not only is the inclusion of an old graphics card on the Mac Pro a strange detail, but the listed processors do not even exist at the appropriate price and performance points in the Sandy Bridge E Xeon E5 line of Intel processors Apple is expected to use. 9to5Mac's pre-launch spec sources have generally been very accurate in recent years, but they appear to be off this time on at least the Mac Pro models.

theSeb
Please check what you're regurgitating from 9to5 for heaven's sake!! :mad:

Radeon 5770? A 3 year old card? Look, Apple does not always use the latest and greatest, but to reuse the same card that's been the entry-level in the Mac Pro since 2010 would be a new low.

3.2GHz quad-core processor? There is no such processor in the Sandy Bridge Xeon line-up. There is a 3.2 Quad core Nehalem, but you can buy it right now in the 2010 Mac Pro.

2.4GHz 12-core ? There is no such thing in the model line-up that one would expect Apple to use

At least try to get the basic facts right. Seriously, you guys.

Edit: I acknowledge that there is an E3 3.2 Quad Core, which was released in April 2011 and there is even an Ivy Bridge E3 3.2 Quad Core released recently, but it wouldn't make sense for Apple to suddenly start using the E3 series. The performance benefit from the 2010 models would not be worth it.

Those processor choices do not make sense based on previous trends.

Edit2: There is another thing that I've completely forgotten about...

The E5 - 24## series and specifically the E5-2440, which is 6 core 2.4 and costs about $832 each and supports dual CPU configurations. The 24## series runs lower TDP than the 26## and is meant to be the more light weight version. But this is designed for servers, rather than workstations, as per Umbongo.

Sandy Bridge-E processors have quad memory channel, so the 3-6-12GB is nonsense. They should use 4-8-16GB configurations.

mirko.meschini
So we are going to get a MacPro with 3-years old graphics card and non-existent processors... Crap!
Score: 48 Votes (Like | Disagree)

jamswirl
Something fishy about those mac pro specs...
Score: 44 Votes (Like | Disagree)

Mr-Stabby
That can't be right. Mac Pro with the same graphics card as the 2 year old base model?? :eek:
Score: 34 Votes (Like | Disagree)

Nova Sensei
Seems like 99% of the time the rumor sites are just regurgitating rubbish to keep the beast moving along......
Score: 20 Votes (Like | Disagree)

Rilution
I do hope Apple has something more exciting in store today than this...
Score: 17 Votes (Like | Disagree)
Read All Comments