M.I.C. gadget points to a pair of posts from Chinese forum WeiPhone.com showing portions of what is claimed to be the logic board and graphic hardware from the next-generation 15-inch MacBook Pro set to be introduced tomorrow. 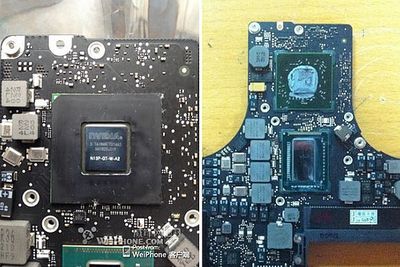 New MacBook Pro logic board with 1 GB GDDR5 graphic memory (left) and current MacBook Pro logic board (right)
One of the reports also claims that the new 15-inch MacBook Pro will arrive with 2.3 GHz and 2.5 GHz chip options on stock models, with a 2.7 GHz chip available as a high-end custom configuration. The exact chips to be offered are not detailed by the poster, but some attempts at matching up to Intel's Ivy Bridge offerings can be made.

At the 2.3 GHz level, Apple would have its choice of the Core i7-3610QM or Core i7-3615QM. For a 2.5 GHz chip, the only appropriate Ivy Bridge processor currently available is a dual-core Core i5-3210M, which would actually be the low-end chip. And at the high end, Apple would apparently be offering the Core i7-3820QM as had been seen in benchmarks that appeared last month.

Apple has been widely rumored to be introducing a redesign MacBook Pro with a Retina display and a thinner profile. But if the leaked photos are genuine they may indicate that no redesign of the body is forthcoming, as Apple would be expected to make significant changes to the logic board to accommodate rearranged internals in a thinner enclosure.

An alternative explanation relates to claims put forth late last week by KGI Securities analyst Ming-Chi Kuo, who indicated that a thinner, Retina-capable Mac notebook would appear as a third member of the MacBook family with Apple continuing to offer the existing MacBook Pro alongside the new model for the time being. In that case, these leaked photos could represent the updated version of the current MacBook Pro with the new notebook still remaining under wraps.

macnchiefs
Apple has successfully confused the rumor mill to the point that no one really has any clue what is going to happen.
Score: 46 Votes (Like | Disagree)

Tiki35
Well, at least we can use the razor sharp front edge of our current Macbook Pro's to slit our wrists if there is no fricken' redesign.
Score: 25 Votes (Like | Disagree)

As much as I would love a 680M, Apple has never equipped, to my knowledge, any of their notebooks with top of the line graphics cards. In create-to-order gaming notebooks, the 680M is a $400-500 upgrade by itself! Imagine the apple tax on that! Other issues would be power consumption and heat. You'd have to rename it the Meltbook Pro!
Score: 21 Votes (Like | Disagree)

swb1192
"Apple has been widely rumored to be introducing a redesign MacBook Pro with a Retina display and a thinner profile. But if the leaked photos are genuine they may indicate that no redesign of the body is forthcoming, as Apple would be expected to make significant changes to the logic board to accommodate rearranged internals in a thinner enclosure. "

Monday August 8, 2022 10:43 am PDT by Juli Clover
With the fifth beta of iOS 16, Apple has updated the battery icon on iPhones with Face ID to display the specific battery percentage rather than just a visual representation of battery level. The new battery indicator is available on iPhone 12 and iPhone 13 models, with the exception of the 5.4-inch iPhone 12/13 mini. It is also available on the iPhone 11 Pro and Pro Max, XS and XS Max, and...
Read Full Article • 348 comments

Monday August 8, 2022 12:53 pm PDT by Juli Clover
Apple today seeded the fifth beta of iOS 16 to developers for testing purposes, introducing some small but notable changes to the iOS operating system. Subscribe to the MacRumors YouTube channel for more videos. We've rounded up everything new in the fifth beta below. Battery Percentage in Status Bar The battery icon in the status bar now displays the exact battery percent, a feature that ...
Read Full Article • 110 comments