Following yesterday's leak of Mac Pro part numbers, AppleInsider now posts a full list of 27 new part numbers said to be on their way to resellers in Australia. A total of 13 of the part numbers are listed as "standalone kits", indicating that they are accessories, which leaves as many as 14 Mac models included in the launch. 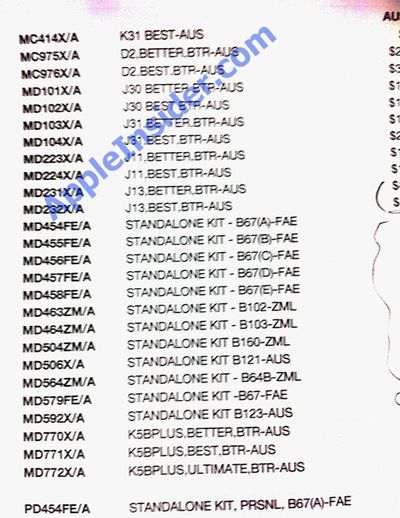 Based on hints included in the leaked image and some additional information, guesses can be made at the identities of some of the remaining products.

The first product on the list, part number MC414, is described as "K31 Best" and appears to have a price under AU$1000. The K31 part number initially appeared a year ago to describe what is now the current generation of Apple's Time Capsule base station. Consequently, this new listing may represent a capacity upgrade to the existing line.

The next group of part numbers includes a pair of "D2" machines with prices above AU$2000 and AU$3000 respectively, and these parts could represent new 15-inch MacBook Pro models. The current stock 15-inch models come in at AU$2099 and AU$2499, and the higher price on at least the new high-end model could be a result of a shift to solid-state storage. The identification of these part numbers as MacBook Pros is mere speculation, however, based only on the best fitting price points of current machines.

The next two pairs of model numbers, J11 and J13, may also be linked and could represent new MacBook Air models. Only the first digit of the low-end J11 price can be seen, and it indicates that pricing begins above AU$1000, in line with the current AU$1099 entry-level price on the 11-inch model.

Following a list of 12 accessory part numbers comes the three Mac Pro models detailed yesterday, and the list concludes with a "PD454" part number that interestingly represents a personalized or engraved version of the B67(A) accessory that appears earlier in the list.

Notably, our speculation on the identities of the various part number does not include a 13-inch MacBook Pro, for which a claimed spec label leaked yesterday. It is possible that one of the model numbers such as J11 could represent two stock configurations of a 13-inch MacBook Pro, but that would leave Apple's set of four MacBook Air models incompletely accounted for in the part numbers.

We caution our readers that these guesses at identifying the various part numbers are indeed speculation based on best fits with Apple's current pricing structure and number of models offered in each of its Mac lines. We do not have specific knowledge of the identities of these models beyond what is shown in the leaked image.

Update: 9to5Mac posts a full matrix of parts and prices along with their speculation on models matching up with those parts. Their guesses are identical to ours with the exception of the K31 part, which with a price of AU$119 would represent a new AirPort Express rather than a Time Capsule upgrade.

The addition of prices for the accessories also indicates that the B67 product is a new iPod shuffle available in five colors and with personalization. Other likely accessories include an external SuperDrive and a USB 3.0 Ethernet adapter. 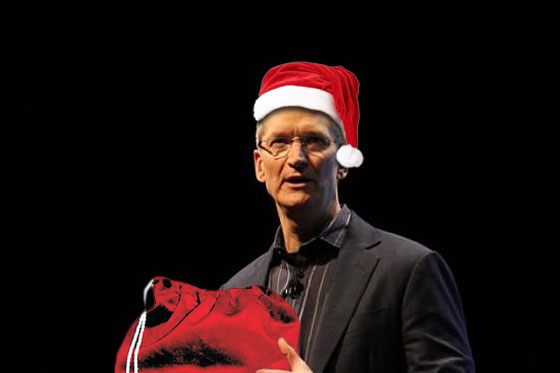 Sharky II
hey, it's like the good old days - when there were rumours about actual macintosh computers. cool
Score: 87 Votes (Like | Disagree)

God it must be good to know so many people are eager to just fill Apple's coffins...


Yes, people are just *dying* to buy their products!
Score: 49 Votes (Like | Disagree)

Dr McKay
No these are just the order codes for the local Chinese restaurant for the team.
Score: 30 Votes (Like | Disagree)

snberk103
Or... there is an Apple employee with a real sick sense of humour, and they're leaking false manifests and then lurking here to watch the churning and the frothing.... :)
Score: 24 Votes (Like | Disagree)
Read All Comments