In November 2010, Mac and iOS developers Algoriddim first previewed their djay app for iPad. The beautifully designed app pushed some boundaries of the iPad by taking advantage of new iOS 4.2-specific audio features that allowed them to perform realtime mixing effects and audio analysis.

That app has since received a number of positive reviews and won an Apple Design Award in 2011.

Later this week, Algoriddim is launching a new app called vjay which again offers some impressive real-time mixing and effects, but now applied to video. Algoriddim has provided MacRumors with this exclusive preview of the app:


Similar to how djay works, vjay allows you to mix/fade between two video clips and apply real time effects to the output. Due to the heavy processing required to decode and mix two video streams, the app only works on the iPad 2 or the new iPad.

Video clips can be full music videos, such as those downloaded from the iTunes store, or they can be your own personal video clips. Audio can either be the original video audio or intermingled with songs your own music library. Both video and audio tracks can be swapped out independently at any time.

Regardless of whether or not you have any actual djing skills, vjay is surprisingly fun to play with once you seed it with your own favorite music videos. Just mixing songs back and forth while playing around with effects is strangely enjoyable. 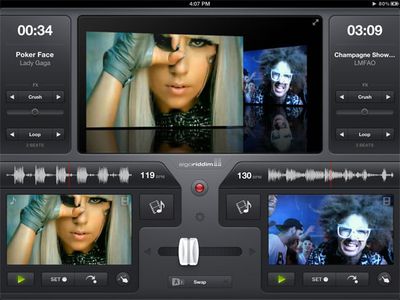 Left: Transitioning from one to another. Right: Integrated iTunes Store. Click for larger.
If you're like me, your first instinct might be to treat the app like another kind of video editing app, stitching your own clips together into some sort of music video, but that seems to miss the point. The actual focus of the app is these sort of "real time" performances and mixing. The app also has the ability to output mixed content in real time via AirPlay to your television.

These real-time performances can also be recorded and saved to your camera roll to save and share. Meanwhile, more advanced users can take advantage of MIDI accessories and a pre-cueing adapter to line up the next song.

vjay will be available for a discounted launch price of $9.99 on June 7th, 2012. Algoriddim has a teaser page accepting email addresses for the launch announcement.

now you have to be both be a good dj & super efficient real time editor!


And clearly the guy in the video was neither. ;)
Score: 6 Votes (Like | Disagree)

daverso
Now you can make headache inducing videos on the go!!!
Score: 5 Votes (Like | Disagree)

Couldn't they have chosen a better name?
vjay?
Ehem.
vjayjay...
;)


"you can touch me anywhere except for my vajajay" - Eric Cartman
Score: 3 Votes (Like | Disagree)
Read All Comments