In the week since Apple's last developer update of OS X Mountain Lion, several new features including hints of automatic app downloads have been discovered in the next-generation operating system. The discoveries are still continuing, with signs of two new features: offline Reading List mode and iOS-like dictation.

Gear Live highlights the offline reading list option, which is an augmentation of the Safari bookmarking feature that debuted in OS X Lion and syncs saved articles across devices. As noticed by Gear Live, a warning screen in Safari on OS X Mountain Lion indicates that articles saved to Reading List are available for viewing even when the user's Mac is not connected to the Internet.

While troubleshooting a home network issue today, I stumbled upon a new feature that Apple is introducing in OS X Mountain Lion. [...] 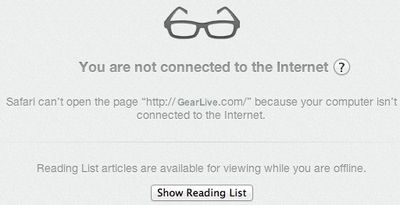 Meanwhile, 9to5Mac reports that a keyboard shortcut listing in the latest build of OS X Mountain Lion suggests that built-in dictation capabilities will be coming to the Mac. Such capabilities debuted as part of Siri on the iPhone 4S, with only the dictation portion making its way into the third-generation iPad released earlier this year.

According to a resources file inside of the latest build of Safari in the newest seed of the upcoming OS X Mountain Lion, Dictation might be making its way to Macs next. Since Macs do not sport virtual keyboards or physical keyboards with a microphone-labled key, users (by default) will apparently need to simultaneously click both command keys to start voice input.

No other evidence of dictation or other Siri-like features has yet been discovered in OS X Mountain Lion, but Apple continues to work on the next-generation operating system and will undoubtedly issue an extensive preview of it at next month's Worldwide Developers Conference in San Francisco.

Mountain Lion seems to have some nifty features, but I have to admit: I miss that excited feeling I used to get when new OS X versions came out (e.g. Tiger, Leopard). Although more expensive, they were stuffed with new user-facing features. The past few years of OS X have not been quite as exciting as iOS...

I'll hold out til WWDC to see if there's something cool and unexpected!


I am gonna repeat the post I wrote in another thread in order to express, once more, a feeling similar to that above.

I want to make it clear that I am probably one of the most vocals "fanboys" out there, having converted at least 15 people to Mac over the last 5 years.

Moreover, I absolutely hate Windows in all its forms. However, the point I am trying to make is that Apple NEEDS to devote further resources to the OS X team in order to: (i) fix outstanding issues; (ii) come up with new features on the basis of experienced users' feedback, and NOT on automatic presumptions that whatever appears on iOS must be replicated on OS X.

I also noted above a number of other problems which are being either deliberately ignored by Apple, or for which there are no specific resources available, such as:

- the pathetic Airport Utility (the availability of version 5.6 notwithstanding);
- the even more pathetic OS X Server (or what remains of it);
- the less-than-ideal implementation and performance of OpenGL/GPU drivers;
- lack of built-in video codecs for Safari and QuickTime (why do I have to install the now-dead Perian for that?);
- lack of possibilities to tweak settings such as mouse polling rates (so as to avoid jumpy cursors in third-party mouses);
- resolution-independence options as referred to above - I mean, Apple has ALWAYS been at the forefront of handicapped people's needs;
- 64-bit awareness and multithreading across the board (I have EIGHT cores waiting to be used and only HandBrake or a handful of pro apps employ them!);
- basic Blu-Ray support (not that I care either, but why not?);
- dual/triple monitor unified desktop support;
- Safari memory leaks (not that I personally care with 16GB of RAM);
- iMessages' disk space bug (which ends up consuming all RAM plus all available space in the startup disk);
- better WebDAV and so on;
- a growing disregard for Apple UI standards across the board.

So there you go; or do you really want me to care about on-screen reminders? For this we already have Growl. And you must agree with me: Launchpad was definitely not Apple's finest hour.
Score: 11 Votes (Like | Disagree)

Only in an apple forum can a tech company be comsidered to eschew criticism for the (admitted) poor performance of one of their flagship products (safari) via a suggestion to use an arch and much maligned competitors product (googles chrome) and the belittling of a free similar product offered by a another company with infinitesimally less resources.

Only in an apple forum...:rolleyes:


I'm a native speaker of English but haven't the slightest clue what you're trying to say in that convoluted tangle of words. :confused:
Score: 7 Votes (Like | Disagree)

Mountain Lion seems to have some nifty features, but I have to admit: I miss that excited feeling I used to get when new OS X versions came out (e.g. Tiger, Leopard). Although more expensive, they were stuffed with new user-facing features. The past few years of OS X have not been quite as exciting as iOS...

I'll hold out til WWDC to see if there's something cool and unexpected!


I feel the total opposite, I feel like every version of OS X that is released is more feature packed than the version before it. Granted, a lot more less visible but very important features were baked into Tiger and Leopard compared to say Lion. Every OS X release is slam packed to the max with new features that get me way more excited than iOS, even though i get excited for both :D
Score: 7 Votes (Like | Disagree)

Joe HS
Cmd-Cmd doesn't seem like the best shortcut to use..
Score: 7 Votes (Like | Disagree)
Read All Comments