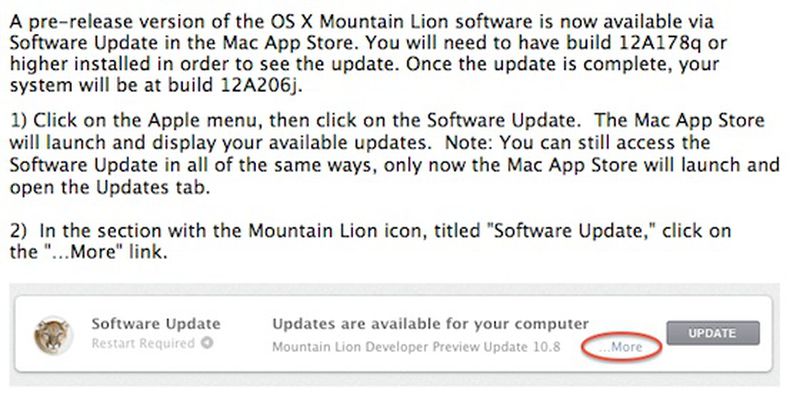 Apple notes that "MacBookPro3,1", which corresponds to mid and late 2007 machines, is not compatible with the new build, but that issue will be rectified in a later build.

No other details on improvements in the latest build are available yet, but it certainly appears that Apple is making some of its final tweaks for developers leading up to its Worldwide Developers Conference less than four weeks away. Apple is expected to provide extensive previews of OS X Mountain Lion at the conference, with a public launch scheduled for "late summer".

The new Mountain Lion build is still a bit short of the 12A211 build spotted in a Geekbench entry for an apparently unreleased MacBook Pro earlier this week. While that entry could have been faked, the data does match closely with what is known about upcoming Ivy Bridge MacBook Pro models, and Primate Labs believes the entry to be legitimate.

LOL @ Retina display. Thats exactly what every developer wants! They want a resolution so high that they will need an external graphics card to be able to run the display.

Is this real life? Release more info for developers and allow us to program on Windows so we don't have to buy overpriced laptops with sub-par components...


Why don't you go pickup a pc, put DOS or Linux on it & hook it up to a CRT monitor and you can enjoy the power that will crackle out of the crevices of your "power-user" system to p0WN all the things with EZ.
Rating: 18 Votes

Pfft. What a joke. Hurry up apple, you corrupt company! With all that liquid cash you would think they could pull this out early. What a joke.


You're absolutely right. Obviously Apple is not spending enough money to develop ML just because they're cheap.

Apple's corruption and frugality is what is delaying the release of ML.

You're so perspicacious in pointing out that they should release it sooner. All that bull crap about about proper testing and de-bugging so we get a smooth running OS with a minimum amount of bugs and glitches is just Apple's corruption and refusal to spend any money on hiring enough developers to get ML out sooner.

Boy, I'm glad somebody finally told the truth about all this.


People will get over it, and we'll probably keep seeing the Ethernet plug as an icon for Internet for a while, even if it gets outdated on laptops, simply because it's very representative networks and the Internet.

After all, we're still saving by clicking on a floppy icon, Mail's icon is a stamp, Logic's icon is a vinyl record, Page's icon is a dip pen, Safari's icon is an analog compass, Find my iPhone's icon is an old-school radar and the iPhone's phone app icon looks like a wired phone from the 80s, just to name a few...
Rating: 14 Votes

LOL @ Retina display. Thats exactly what every developer wants! They want a resolution so high that they will need an external graphics card to be able to run the display.

Is this real life? Release more info for developers and allow us to program on Windows so we don't have to buy overpriced laptops with sub-par components...


I don't want to develop in a sub-par OS :rolleyes:
Rating: 12 Votes

This wait is getting a bit ridiculous though. I can't even remember when Lion came out, but I'm pretty sure it was mid-2005. Since then Microsoft have launched two updates to Windows. So there!

Boy, you really got me with that "So there!"


Why would they do that?
Rating: 9 Votes

I'm in no rush, it's important that they sort it out properly.

The more updates they push out before public release, the better :)
Rating: 9 Votes

chriscrk
Ohhh I can't wait for this! :D

Someone please let us know if you find any new features!
Rating: 9 Votes

zorinlynx
I get less excited about new OS X releases lately. It used to be a feeling of "what awesome new features are we going to get?" These days it feels more like "What is Apple going to take away or dumb down?" or "Are they going to cripple OS X to make it like iOS"

Maybe I'm being paranoid or unreasonable, but it feels like ever since iOS took off, that's the company's main focus and us Mac users have been somewhat left behind.

The fact that we haven't seen a Mac Pro in so long is also depressing.
Rating: 8 Votes