With Apple's MacBook Pro line now widely rumored to be gaining ultra high-resolution "Retina" or "HiDPI" displays at next month's Worldwide Developers Conference, CNET reports that such panels are already available in the supply chain and that they carry price premiums of up to $100 over their non-Retina counterparts. But what remains to be seen is whether that price difference will be passed along to consumers or if Apple will find ways to cut costs in other areas in order to maintain its existing price points.

DisplaySearch Senior Analyst Richard Shim says that super high-resolution 13.3-inch and 15.4-inch panels that Apple would be a prime candidate to use are already available from suppliers. 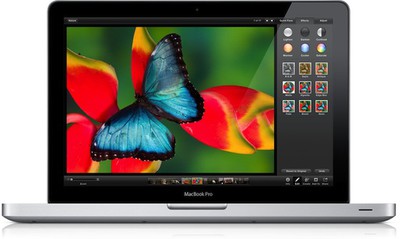 Unaddressed is the 17-inch MacBook Pro, which would require a display of 3840x2400 and undoubtedly carry an even higher price premium over the current display. It is unclear, however, whether the 17-inch MacBook Pro will be receiving the same upgrades as the rest of the family at WWDC, as most rumors so far have pointed to only 13-inch and 15-inch MacBook Pro models being in production. In addition, Apple has been rumored to be following the pattern of its transition to the unibody MacBook Pro design in moving the 17-inch model to the new form factor several months after its smaller siblings.

Shim notes that with these Retina resolution displays available in the supply chain, Apple is the most likely customer for the screens, although he has been unable to confirm what company or companies are purchasing them for use in their computers.

Also unclear is how Apple will handle the cost increase associated with the Retina displays. While some cost savings will be achievable by the removal of the optical drive, Apple will almost certainly see increased costs for storage as the MacBook Pro reportedly moves from traditional hard drives to solid-state drives. While such drives are used in the lower-priced MacBook Air models, higher-end users expected to be drawn to the MacBook Pro will likely demand higher-capacity drives at significantly greater costs. Consequently, it will be interesting to see how Apple ends up pricing the redesigned MacBook Pro given all the changes involved.

And we are good to go

I edit to clarify mi post. When Apple removed the DVD from the Mac Mini, they dropped the price 100 bucks, so why not this time too?
Score: 62 Votes (Like | Disagree)

edk99
I hope there is a matte option with this new display.
Score: 56 Votes (Like | Disagree)

ArtOfWarfare
Apple could easily afford to bite the bullet on this and only have a 10% margin instead of a 30% margin while they wait for prices to drop.

I seriously doubt they will, though. They'll probably let the margin drop 5% or so in the interest of keeping their prices roughly where they are.

And we are good to go

Rennir
We're talking about the company that charges $200 for 4GB extra RAM here ;) I doubt they'll absorb the costs.
Score: 36 Votes (Like | Disagree)

basesloaded190
I think $100 would be fairly reasonable for a screen of that quality
Score: 32 Votes (Like | Disagree)

I saw and played with the new iPad and the retina display was not a mayor factor at all.


I have an original iPad and a new iPad and I respectfully disagree.
Score: 31 Votes (Like | Disagree)
Read All Comments