AirPlay is a technology that seamlessly moves audio and video from device to device in the Apple ecosystem. It's built into the iPhone, iPad, and -- most importantly -- the Apple TV set-top box. Among other things, AirPlay can be used to send video from iPhone apps like YouTube, MLB.tv, or WatchESPN to the AppleTV. 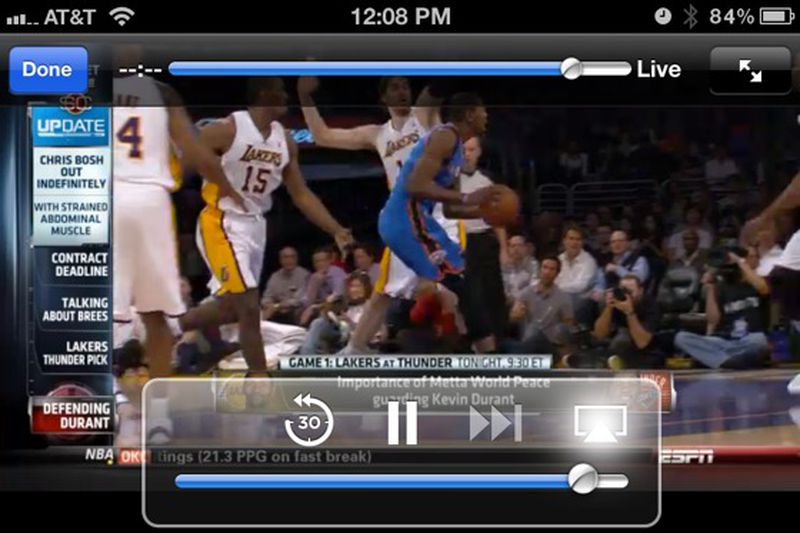 Apple hasn't advertised AirPlay as strongly as some other features, like the iPhone 4S's Siri, though it did run a television ad after the iPhone 4 was introduced in 2011. That said, it's surprising that Glenn A. Britt, the chief executive of Time Warner Cable said he hadn't heard of the service, according to the New York Times.

"I’m not sure I know what AirPlay is," he said, though he noted that he was an enthusiastic Apple customer. "Today we want to be on every screen. Today it’s a little bit clunky to get programming from the Internet onto the TV — not so hard to get it on your iPad. What’s hard is the plumbing, what wires do you connect, what device do you use. So the current Apple TV, the little thing, the hockey puck, really doesn’t do anything to help enable you to get Internet material on your TV."

Ironically, Apple has solved Britt's problem -- though he wasn't aware of it -- but the company is not pushing AirPlay too strongly upon its users, nor the media companies. The Apple TV natively supports only a handful of third party services like streaming MLB, NHL, and NBA games, as well as Netflix.

However, AirPlay support has allowed many apps to send "programming from the Internet onto the TV", just as Britt wants, and could foreshadow the market segment a rumored Apple television set would fill.

CBJammin103
Can't wait until we can say "good riddance" to the network television providers.
Rating: 23 Votes

0815
*That* is why cable tv is doomed ... made by dinosaurs for dinosaurs. They have no idea what is going on in the world and have no interest in improving things as long as the old model brings money. Once they wake up, it will be too late and they will blame the pirates for it.

Honestly, I'm willing to bet a lot of people don't know what AirPlay is.

Sure, and nobody is expecting that everybody knows it - my Mom does not know and there is no need for her to know (at least not yet). BUT: from someone running a huge media company, I would expect that they know what is going on in THEIR market segment (or is potentially either improving or threatening it, depending on how well informed they are)
Rating: 22 Votes

bushido
the CEO of a company has no clue ... shocker

how else could anyone explain their 90s business models
Rating: 22 Votes

Honestly, I'm willing to bet a lot of people don't know what AirPlay is.


Very true, but they’re probably not CEOs paid massive salaries to deal with (and speak about) challenges like the following:

"Today it’s a little bit clunky to get programming from the Internet onto the TV — not so hard to get it on your iPad.”

If only there were some easy way to get video from that iPad to your TV!

Perhaps Apple TV? Where does it get video from? Maybe from the Internet?

"So the current Apple TV, the little thing, the hockey puck, really doesn’t do anything to help enable you to get Internet material on your TV.”

Nope, I guess Apple TV gets material from... somewhere else. The grocery store, I think. :p
Rating: 17 Votes

I still don't know what airplay does or why it exists. Probably because whatever it does I have no need for.

Am I an idiot as well?


Are you the CEO of a major technology company whose business it is to know what's going on in that area. It's like hearing an orthopedic surgeon saying he's never heard of using platelet rich plasma to speed up healing time. I'll bet most people haven't heard of that, but if you're a surgeon and you don't know that, you're an idiot.
Rating: 11 Votes

room237
As a Time Warner customer, this really explains A LOT.
Rating: 10 Votes

techfreak85
Yet another example of how out of touch the media industry is.
Rating: 10 Votes

I still don't know what airplay does or why it exists. Probably because whatever it does I have no need for.

Am I an idiot as well?


If you come to MacRumors more than once a week and you don't know what Airplay is... that's possible...

But THIS guy works in the media. It's his job to know... or at least it's the job of his underlings to inform him of this feature. One that has been around for well over a year.
Rating: 9 Votes


Nice to see you giving him the benefit of the doubt in our hate-first-and-ask-questions-never forum culture, but when he talks about the plumbing and wires and not knowing anything about which devices to use, he doesn't sound like he's being ironic. He sounds like a n00b.
Rating: 9 Votes
[ Read All Comments ]