Qualcomm yesterday warned analysts that it is experiencing supply issues with some of its advanced mobile phone chips, particularly its new 28-nm modem chips set to power the next wave of LTE devices.

"At this stage we cannot secure enough supply to meet the increasing demand we are experiencing," Chief Executive Paul Jacobs told analysts on a conference call, adding that the issue would limit revenue growth this year. [...]

"Demand went so far ahead of availability that we've decided to start spending more money to get more supply as soon as possible," [Chief Financial Officer Bill Keitel] told Reuters. "Any time we can't make a customer totally happy I'm going to worry. You don't want to give a customer a reason to go elsewhere."

As a result of the issues, analysts believe that vendors may have to slow their rollout of new devices, and a report out today from Piper Jaffray's Gene Munster predicts that the next-generation iPhone will arrive in October. 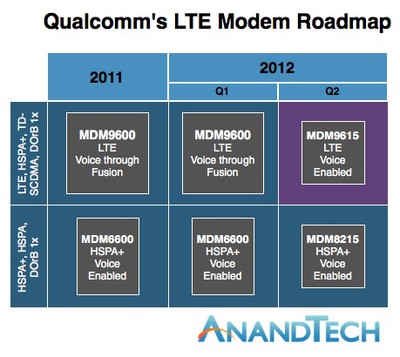 Qualcomm's LTE modem roadmap (Source: AnandTech)
Munster had previously been modeling for an August launch as a hedge between those thinking the device may arrive in June and those thinking it will arrive in a September-October timeframe similar to the iPhone 4S. Apple is expected to use Qualcomm's 28-nm MDM9615 modem chip in its next-generation iPhone to provide LTE data and voice services, and the chip appears to be one of those impacted by Qualcomm's supply issues.

QCOM will likely support an Apple iPhone launch in October. Based on our checks, we believe the design win momentum of QCOM's 28nm products has been exceptionally strong and a 28nm LTE baseband is likely designed into the next iPhone. QCOM's supply issue likely pushes the launch of the iPhone to October. Based on the increased capital spending this year from TSMC and QCOM's efforts over the last quarter to port its 28nm designs to UMC and probably Global Foundries, we think QCOM will have the capacity to support a Q4 LTE iPhone 5 launch. Moreover, the slow wireless infrastructure spending in 1H:12 is also likely a result of the lack of availability of a low power 28nm LTE baseband modem.

Apple may have been planning for a September-October iPhone launch all along, but Qualcomm's issues seem to make it less likely that those holding out hope for an earlier launch will see something closer to the June-July timeframe that had been the traditional launch window prior to last year.

Munster believes that it is "irrelevant" whether the iPhone launches in August as his model currently predicts or in October, with the primary driver of success being whether the upgrade is a compelling one for consumers. And with the next-generation iPhone expected to offer LTE support and carry a redesigned form factor, it seems likely that it will be an attractive device for both new and upgrade customers.

yegon
Love to see the next iPhone mid year but I'd be surprised. Everything points towards the cycle of q1 iPad, q2-q3 mac, q4 iPhone. Spreads the announcements and focus throughout the year.
Score: 4 Votes (Like | Disagree)

dagamer34
The iPhone was never going to launch in June:
1) No iPhone has ever been released without a new version of iOS to go along with it.
2) iOS 6 has not even hit beta stage yet. It would have done so already like in years previous to 2011.
3) The current iPhone would only be 9 months old in June.
4) Because LTE networks are just being built, the longer they wait, the more of them there are.
5) There is almost zero chance TSMC would have produced enough Qualcomm LTE chipsets for a June launch. That means they would be making them in volume right now, which I doubt since Qualcomm has prioritized its 28nm orders for the MSM8960 for launch in phones right now.

The one thing Apple cannot keep secret is road maps of partners products and their past history. Combine the two together and you can see why any suggestion of a June launch is delusional.
Score: 3 Votes (Like | Disagree)

I work in a public school and you should see all the education acronyms! At our monthly staff meetings, we have this tall bottle. If someone says an acronym & doesn't say what it means, they have to put in a dollar and all money collected gets donated to a charity or something. Pretty funny.

I'll believe it when I see it.


Believe what? That these chips are going to be delayed?
Score: 3 Votes (Like | Disagree)

charlieegan3
There are so many different mobile acronyms...