Just over a month after the arrival of the previous build, Apple today seeded registered members of the Mac Developer Program with the third developer preview version of OS X Mountain Lion.

The new version arrives as Build 12A178q, up from the earlier 12A154q version. Changes included in the new version have yet to be discovered, but those with access to the build will undoubtedly be searching for Apple's latest tweaks as the company continues to work on the next-generation operating system.

Apple does list a number of known issues with the current build:

- On systems with FileVault enabled, canceling the restart to the Mountain Lion Developer Preview 3 Installer may leave your system unable to present a password dialog at boot time. You can repair the problem by holding down command-R to boot to the Recovery OS and then using Disk Utility to unlock and Repair your volume.
- Installing OS X 10.8 over 10.7.2 or earlier with FileVault turned on may fail
- Pre-Lion FileVault user accounts are not supported in this Developer Preview
- Some Apple menu items such as Restart may not work when a sandboxed app is in the foreground
- iTunes no longer syncs Notes
- Mail's photo browser cannot access the iPhoto library
- Back to My Mac doesn't work for the first 5 minutes after rebooting
- DVD Player may not launch after inserting a DVD on some systems
- Most help topics are unavailable in this Developer Preview
- In the Recovery HD:
- Some icons may be missing
- Network Utility's Lookup pane does not work
- Time Machine restoration via a AFP share does not work
- Restoring from a Time Machine backup via AFP does not work
- Migration from a Time Machine backup that excludes paths such as /System may yield an unusable system
- Brightness settings may change unexpectedly after reboot
- Display brightness may be dim after sleep or reboot
- If Mail is hidden at logout time, it may not be correctly relaunched during a subsequent login but will appear to be running
- Java applets may not work in Safari
- QuickTime screen recordings may produce corrupted videos or cause an exception when run on machines with NVDIA graphics

Apple also appears to be continuing to put a fair amount of effort into getting Game Center up and running on OS X with the new build.

OS X Mountain Lion is Apple's next major operating system version and is scheduled for release in "late summer". The release will offer greater integration with iCloud, as well as a number of new feature including some drawn from iOS.

Please give us an option in system preferences to turn OFF grouping of windows when Mission Control is activated. A simple OPTION would satisfy so many people and would have ZERO effect on all those that negate this request.

If you have 3 windows open in Illustrator and another 3 open in Photoshop and you want to drag an object from illustrator to photoshop, you need to do the following;

STEPS 3 AND 4 RIGHT THERE ARE WHY MISSION CONTROL IS A FAILURE.

Expose allowed everyone to go DIRECTLY into the desired open document window of any specific application, bypassing steps three and four. Lion DID NOT make things easier, it made workflow SLOWER.
Score: 29 Votes (Like | Disagree)

Please give us an option in system preferences to turn OFF grouping of windows when Mission Control is activated. A simple OPTION would satisfy so many people and would have ZERO effect on all those that negate this request.

Nobody likes nazies. Unless they are zombies as well.

Just to be more accurate, it would have a (negligible, but) non-zero effect on those who negate the request. After all, it would be an additional checkbox for eyes to scan over, it takes up physical pixels, etc.

If it were truly zero negative effect, then all software and operating system problems could be solved by adding more checkboxes in the settings. But who wants to use software that has really complicated settings pages?

A single checkbox in System Preferences isnt somehow going to make things any different. Here's how it looks like in OS X Lion currently; 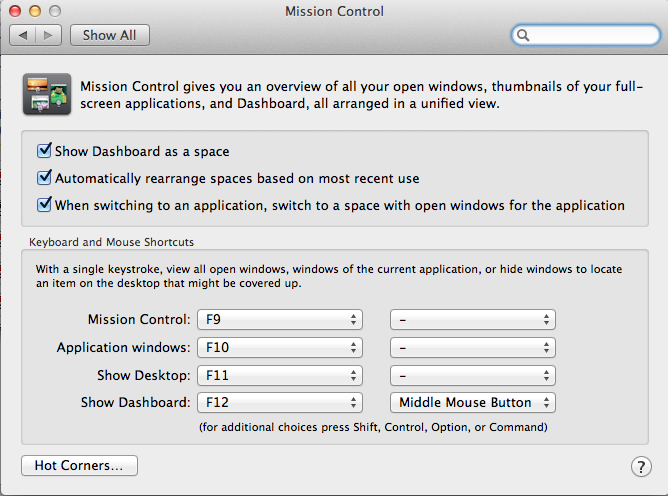 Heres how it is in Snow Leopard;

Anyone that knows how to use System Preferences wont find the single extra checkmark any more confusing. The options in OS X change regularly anyway, but Apple has failed miserably to give multitaskers some proper options with Mission Control, that is to say, Expose was fantastic, seeing ALL my open windows ALL AT ONCE by hitting a hot corner gave me the ability to quickly go from Illustrator to Photoshop without hitting any keys or using a trackpad and, this is the big one; without releasing any objects i've selected in Illustrator. Direct drag and drop via Expose is now GONE.
Score: 13 Votes (Like | Disagree)

afin
I hope they take as much time as they need to smooth things out.
Score: 12 Votes (Like | Disagree)

Sorry to be the Grammar Nazi, but it should be a "number of new features."


Nobody likes nazies. Unless they are zombies as well.
Score: 11 Votes (Like | Disagree)
Read All Comments