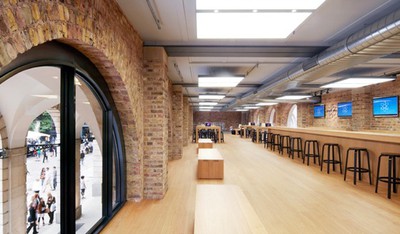 A high-level Apple retail employee here in London told me today that the company is planning to stock its London area retail stores with international replacement MacBook Pro, MacBook Air, and MacBook keyboards. This way, the retail outlets will have the spare parts on hand should international journalists need a quick turnaround on a damaged laptop.

As my source told me, "London is going to be overrun by an onslaught of journalists when the games begin. We want to be prepared should they need help with their equipment during the time they are here."

TUAW notes that along with the thousands of athletes and other support staff attending the Olympics, more than 10,000 print journalists are expected to be covering the games, along with numerous other bloggers, editors, photographers, videographers along with thousands of tourists -- many of them Mac and iOS users.

It is likely that the London-area retail stores will see some of their heaviest traffic ever during the Summer Olympics, and will have extremely high staffing levels to prepare for it. London itself has five Apple Stores, including the Regent Street and Covent Garden flagships.

The 2012 Olympic Summer Games will run from July 27th through August 12th.

Navdakilla
That store will probably drive the q3 earnings into another record breaking quarter.. Hopefully Usain Bolt can break some records too
Score: 7 Votes (Like | Disagree)

l.w41sh
I like the brick. It is cool to see something other than all silver.
Score: 7 Votes (Like | Disagree)

Shrink
Whoever is responsible for this action doesn't miss a trick when it comes to marketing.

Oh stop it with the Mac stuff. Over half of Apple's revenue is from iOS. Besides, when Macrumors was founded, there was no such thing as iOS. It's an Apple forum, don't put so much stock in the name!
Score: 6 Votes (Like | Disagree)

In case you didn't know, this site is also called AppleRumors.com ;)

It's also called this:

Timoke6
I didn't realise the Olympic games are only two and a half months away!

but OT; this is a really smart move from Apple:)
Score: 5 Votes (Like | Disagree)
Read All Comments

Tuesday May 11, 2021 11:56 am PDT by Joe Rossignol
Last month, Apple introduced a new iPad Pro with the same M1 chip found in the latest Macs, and early benchmark results indicate that the M1 iPad Pro is over 50% faster than the previous-generation iPad Pro. Based on five legitimate Geekbench 5 results (here's the fifth) for the fifth-generation 12.9-inch iPad Pro with the M1 chip, the device has average single-core and multi-core scores of...
Read Full Article • 353 comments