eSATA is a high performance drive connector used to connect external hard drives to your computer. eSATA has never been a standard option on Macs, but is a faster alternative to USB 2.0 and Firewire and is commonly found on high performance external drives and storage arrays. 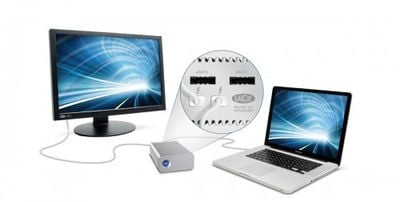 For those who are have existing eSATA drives or are waiting for Thunderbolt drives to drop in price, this could be a good interim solution. The Hub isn't yet available for order on LaCie's website. We spoke to someone at LaCie's sales center who told us the first batch had sold out, but that more were to arrive in a few days. Interested parties can contact LaCie sales directly to place an order for one of these backordered units, and it'll ship out when LaCie receives them.

barkomatic
To think I waited and waited for thunderbolt to be introduced on the Macbook pro because I thought I could use all these fast new peripherals. Little did I know how stupidly expensive they'd be and that for the entire life of my computer I'd never once use that port.
Score: 10 Votes (Like | Disagree)


changed you mind quickly on that one :)
Score: 8 Votes (Like | Disagree)

Domalais
The pricing on this doesn't make sense.

scarred
Thunderbolt continues to be a big disappointment. That is the one feature on my MacBook air that is going to waste. Too bad.
Score: 6 Votes (Like | Disagree)

They talk about eSATA being faster than USB2, but isn't it slower than USB3? So the only advantage of doing it with Thunderbolt is daisy-chaining?

Every hard drive has a SATA connector.

Each of those translates the data from the SATA connector to their own format.

eSata does not translate data, it is a direct connection between SATA connector in the computer and the hard drive.

So no connector could ever be faster than eSATA. If you have a 5 GBit USB3 adapter plugged into a 3 GBit SATA connector, you will never get more than 3 GBit out of it.

Now all that said, this box is just stupid. Every hard drive in the world has SATA. SATA is electrically the same as eSATA. So instead of $200 for a box with two eSATA ports, which forces me to use bloody expensive external eSATA drives (a quick look showed a 2 TB eSATA drive for £180, while a 2 TB USB drive is only £85), it would be much more effective to build a box with two SATA connectors and space for two internal SATA drives inside. That would save the customer £200 on the drives, so the box would be worth its money.
Score: 5 Votes (Like | Disagree)


Which pretty much defeats the purpose of using the SATA port...
Score: 5 Votes (Like | Disagree)
Read All Comments