Feral Interactive is serving up BioShock 2 to Mac users via the Mac App Store, two years after it arrived on the PC. It costs $30.99 on the Mac App Store, or via Feral directly. The game does include a multiplayer component as well.

Feral is dedicated to bringing major game titles to the Mac, and has taken to the Mac App Store in a big way. The company already sells a Mac version of BioShock 1, amongst a number of other titles. 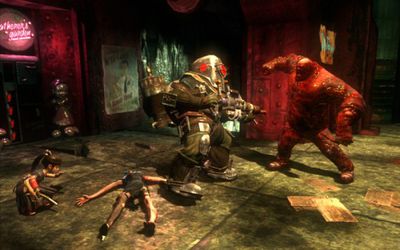 Welcome back to Rapture. Paradise reborn.

Deep within the ruined undersea city of Rapture, your beloved Little Sister, Eleanor, awaits your return. As her Big Daddy, you protected her from a world of insanely selfish adults, now you must shield her again from those who demand that everything must be shared.

Ten years after the events of BioShock, Rapture has fallen under the control of a collectivist cult who plan to transform Eleanor into a genetically-engineered messiah, who will put an end to individuality forever. To save her, you must deploy a unique combination of shooting, role-play and stealth as you rampage through Rapture’s leaking halls to confront her captors.

Whether you choose to forgive those who threaten Eleanor or wreak vengeance upon them, remember, she is always watching and will follow your example.

I played the first bioshock on my 360 and really enjoyed. I rented the second one, but couldn't get into it as much. Maybe I should give it another shot...


Sadly when it's a 2 year old game, one that in hindsight people have said wasn't really very good either, and one which can routinely be picked up for sub $10 on any other platform - it is bad.

Feral just took too long with this. If it was out within 3 months of PC title, fair enough. But they've missed the boat on this one.
Score: 8 Votes (Like | Disagree)

Again, for the uninformed out there: what makes a Mac a Mac is its operating system, not the hardware per se.

I do NOT, as a Mac user, want to delve into Mac gaming threads just to find that I need to spend 200 extra dollars just to install a different, inferior, effing system called Windows.

Okay. But nobody here is breaking any rules that I can see, so it looks like you might have to put up with it.

And you, more than anyone else, should know better as a MR "demi-god". There are 100 to 1 Windows sites out there - don't make it look as this should be another one of them. And if this is the case, please ask Arn to change its name to PC/Mac Rumors.

How much? Much cheaper on Steam. For both games.

Still great! (hoping for a refreshed Mac mini or iMac to fully enjoy it)

If only we could avoid waiting years for a port of the third Bioshock!
Score: 4 Votes (Like | Disagree)
Read All Comments