Android and iPhone Own Nearly The Entire U.S. Smartphone Market

The latest data from Nielsen suggests that between the two of them, Android and Apple's iOS have relegated other smartphone operating systems to sub-single digit market share. The closest competitor -- RIM's Blackberry -- counted only 5% of U.S. smartphone purchases in the past three months. Other operating systems, including Windows Phone, Symbian, HP/Palm's WebOS and others, added up to only 4% share combined. 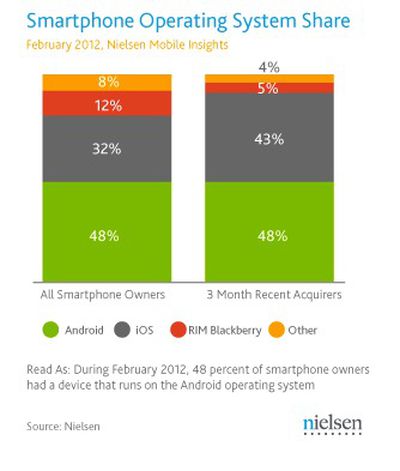 Apple's iPhone has been more popular of late, with the recent release of the iPhone 4S. The iPhone is the device of choice for 32% of current smartphone owners, but has made up 43% of recent smartphone purchases -- entirely at the expense of BlackBerry and the other small-share operating systems.

Don't you think the Windows phone is going to start to have a growing market share? Microsoft has deep pockets and I suspect they will support it very strongly.

chrono1081
I guess "Research In Motion" didn't research enough to stay on top ;)

I'm actually glad to see this, supporting Blackberries always sucked where as supporting iOS and Android are very easy.
Score: 8 Votes (Like | Disagree)

How so, The android OS predates iOS, as google purchased the company that produced it. Its based on linux, has a completely different UI, filesystem and SDK. So what exactly did google copy iOS?


Release date. Don't you know that anything released after a certain product is automatically branded a copy? :D

Why didn't Google announce an amazing new OS and phone on January 9, 2007?

Because it didn't exist.

You gotta remember... the mobile phone industry was pretty stale back then. Just 2 days before Apple's iPhone announcement... Palm announced yet another crappy Treo. Yikes.

Google didn't even announce Android and the whole Open Handset Alliance until 11 months after Apple announced the iPhone... and the first Android phone didn't come out until 22 months after the iPhone was first announced.

Who knows what Google would have done if it wasn't for the iPhone... they were sitting on Android since 2005.

But there weren't. Apple jumpstarted this new mobile revolution. Everything afterwards... you decide.
Score: 6 Votes (Like | Disagree)

summitRun
That 5% number for RIM is mind blowing. Has any company squandered/mis-managed a brand (in N America) worse than they have in the past 5 years? I cant think of one. Very sad as I WAS a 6 year BB owner :(
Score: 6 Votes (Like | Disagree)

B777Forevar
Expect to see WP7 to make a dent in those stats this year. Especially with the Lumia 900 coming out soon.
Score: 5 Votes (Like | Disagree)

I hope WP7 fails, and puts a hole in Microsoft's deep pockets. I just hate MS for failing to improve Windows. You still see blue screens of death. They still have the registry system which slows down installs/updates. Windows Update takes forever and sometimes errors out. Mac OS updates are quick and always finish (crossing fingers :)).

RIM is just waiting to be bought by Apple, Google, or MS. They are done. They had 5 years to do something but they haven't done anything.


Where do you see these blue screens of death? I haven't a blue screen of death since Windows 98. Which version of Windows are you using?
Score: 4 Votes (Like | Disagree)
Read All Comments

Monday December 5, 2022 11:44 am PST by Juli Clover
Due to production issues at Apple supplier factories in China, the iPhone 14 Pro and iPhone 14 Pro Max are backordered and basically out of stock at every store. If you were planning to gift or receive an iPhone 14 Pro model for the holidays and didn't already get one, you're basically out of luck because they're gone until late December. Subscribe to the MacRumors YouTube channel for more ...
Read Full Article • 142 comments