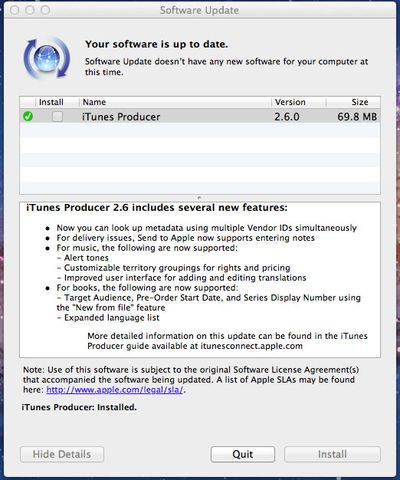 Several readers have noticed the appearance of 'iTunes Producer 2.6' in their OS X Software Update. iTunes Producer is Apple's submission tool for music (and books) to the Apple iTunes Store.

iTunes Producer: This free software application allows you to prepare your music for direct delivery to iTunes. Use it to encode your music in AAC format; enter album, song, and cover art information; and send your prepared files directly to Apple for consideration.

The appearance has generated some confusion amongst users who are unfamiliar with the software, suggesting it may have been inadvertently pushed to unintended users via Apple's OS X Software Update mechanism.

Movura
By the looks of it, it's also the new Application Loader. This is what I see when I log in with my account... 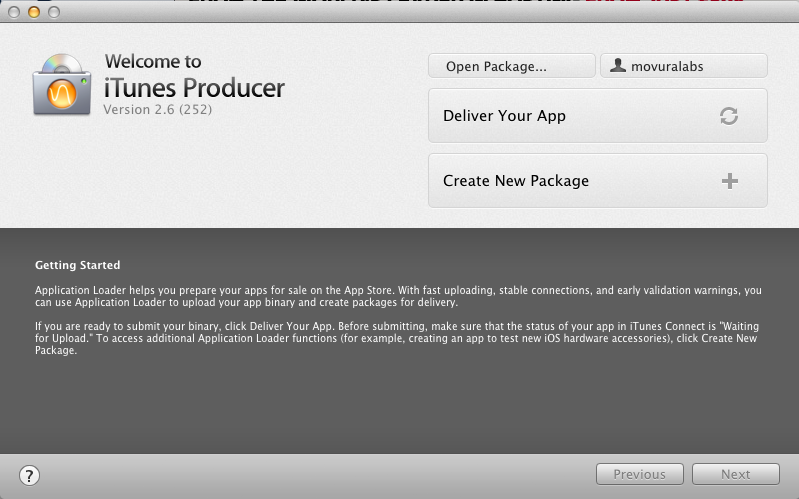 I'm guessing that they're rolling everything into the one package.

I'd also suggest that this isn't meant for public consumption just yet.
Score: 5 Votes (Like | Disagree)


iTunes Producer is also the publishing software for iBooks Author books, so the update may be detecting users who have simply installed iBooks Author as well.


I do not have iBooks Author installed but I still get iTunes Producer showing up in my software update, so I don't think the above is true - at least in my case.
Score: 3 Votes (Like | Disagree)

SkippyThorson
I was all ready to jump on here and ask, or submit something to Arn via Messages, but of course the folks on here were quicker than myself. :p I always appreciate how on-the-ball the team is.

Anyhow, I installed it after reading about it here. I have a book going in iBooks Author that, when finished, I'd like submitted, obviously. Any tool that makes this easier is a welcome addition. It installed just fine, yet Software Update does try to look for and install it again, as some here have mentioned. Also to note, it really doesn't look like it was ready for primetime, but that's just my opinion.

Personally, I can't see any negative impact if you submit content to any of the App Stores. The only downside as far as I can tell is for users who are trying to save precious space on a MacBook Air or a smaller SSD. It's not a huge program by any means, so it doesn't bother me.

My only question regarding it is why such a Utility (not a full-featured program, really) would go into the general Applications folder and not in Applications -> Utilities, much like QuickTime 7 that got pushed there when the new version came out.

I have one thought too; I really feel like I've seen that orange ball in the icon somewhere before. I can't put my finger on it.

ghwis.wordpress.com (http://gwhiz.wordpress.com/2008/01/08/itunes-producer-under-the-hood/) (which I've never heard of; Google-searched it) wrote a long article with tons of screenshots, info, and a walkthrough back in 2007.

Looks like iTunes Producer has been around a while; I at least found version 1.6 built in to iTunes. Perhaps this new version just divides this out of iTunes and makes Producer its own application; ready to suit any Apple Store; whether it be iOS Apps, iTunes, Mac Apps, iBooks, etc.
Score: 2 Votes (Like | Disagree)

AdeFowler
Showing up for me. I have Xcode installed but not iBooks Author.

This would never happen in Steve's day /jk
Score: 2 Votes (Like | Disagree)

I do not have iBooks Author installed but I still get iTunes Producer showing up in my software update, so I don't think the above is true - at least in my case.


Same for me. In fact, I'm running 10.6.8, so I can't even install iBooks Author, which is Lion-only. But iTunes Producer 2.6 is showing up for me in software update.
Score: 2 Votes (Like | Disagree)
Read All Comments